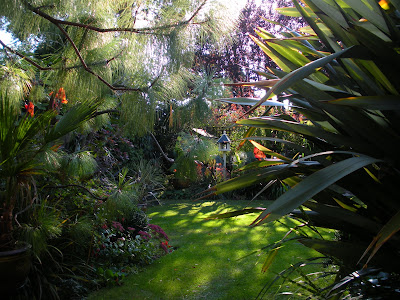 A completely irrelevant picture of my garden, taken on 17 October, when we could still pretend it was summer
I was invited to a lovely luncheon party today, hosted by Lady Hamilton of Dalzell, vice-president of the conservation charity Plant Heritage, at her home in Surrey.
The journey took me out of London via the A217, a road romantically known as the Sutton bypass. It's not my favourite road, since it is punctuated at regular intervals by speed cameras, traffic lights, and people who want to make inconvenient right turns, but don't always signal this intention until the very last minute.
Today, however, with the last of the autumn leaves clinging to the trees, and a low mist veiling the North Downs, it seemed positively idyllic.
The guests were a mixture of journalists and Plant Heritage people, including three National Plant Collection holders. These were Chris Lane (hamamelis, and also wisteria), Roger Parsons (lathyrus, ie sweet peas) and Michael McIllmurray (orchids). Sadly, I didn't get a chance to talk to Dr McIllmurray, but it was fascinating listening to Roger and Chris.
Chris was sitting next to me at lunch, and he was so bombarded with questions that he could hardly eat his boeuf bourguignon (served with potatoes dauphinois and carrots, and followed by apple crumble and cream. Now that's what I call a November lunch.)
National Plant Collection holders, as you might expect, are men and women with a mission. Chris Lane told us how, when he decided to specialise in witch hazels at his home in Kent, he only had an empty field and the traditional wisdom is that they prefer woodland conditions. Undeterred, he went ahead - and found that his hamamelis seemed to bloom even more prolifically in an open situation.
His nursery is wholesale only, although he does hold open days and you can find details here. Only got room for one witch hazel? Chris recommends Hamamelis x intermedia 'Pallida', which has large yellow flowers, a wonderful scent and yellow autumn leaf colour too.
Roger Parsons has worked as a gardener all his life, but it was only when he took early retirement that he was able to concentrate on his passion, sweet peas. His favourite is 'Albutt Blue', a Semi-Grandiflora variety that is white with a blue picotee edge and a wonderful scent.
Roger, like many gardeners, uses well-rotted horse manure as a fertiliser, but unlike many gardeners, his manure comes from his own horses. His wife is a keen horsewoman and she has introduced Roger - who doesn't ride - to miniature horses. They have their first mare in foal, and the new baby should be trotting around in time for the nursery open days in June.
Details of these will be posted on Roger's website. I'll be there. Wild - or indeed miniature - horses couldn't keep me away.
Posted by Victoria Summerley at 7:44 PM