End of the month view 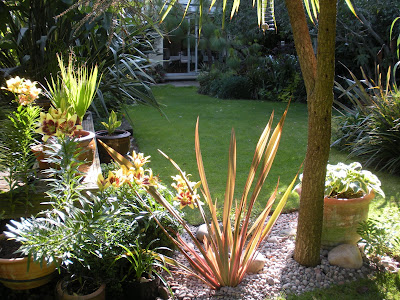 I always love looking at everyone's end of the month views, but rarely get organised enough to do my own. However, I had one of those very rare moments in the garden the other day when I thought things were looking OK. I knew it would only last two minutes, so I wanted to capture it while I could.
The main reason for this is the lilies, which are currently in bloom. I feel very proud of them because I spent ages hovering over them earlier in the spring, squishing every lily beetle I could find. I don't know which variety they are - I've forgotten. If anyone knows, please tell me. I'm very fond of them because I bought them at Sissinghurst while I was there with Gail of Clay and Limestone and Frances, of Fairegarden. 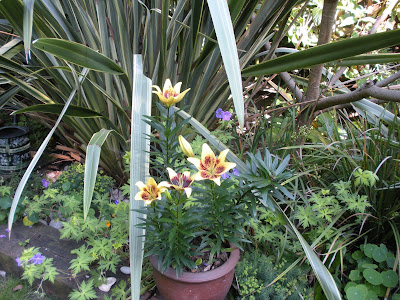 More unidentified lilies. I've had a look through lots of lily catalogues and can't find them. They are Asiatic, I know that. I bought some 'Patricia's Pride' at the Malvern show, which looked similar, but I don't think they are the same at all. 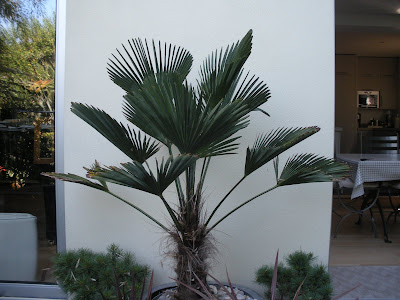 My "waggie" (Trachycarpus wagnerianus). I had a bay tree in this pot for ages, which never looked very happy. Each year it looked more and more sickly, so this year I bit the bullet and ripped it out. The trachycarpus looks so much better. Do you ever do that in your garden - finally get rid of something and wonder why you didn't do it years ago?
One of the great features of the waggie is that it throws wonderful shadows on the wall behind when the sun hits it in the afternoon. 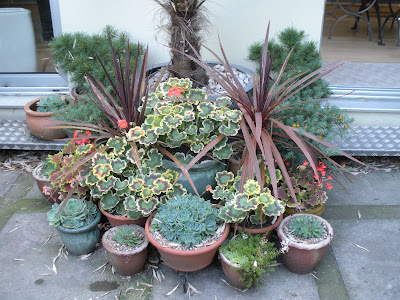 I wish I could be a minimalist, stylish gardener and just leave the waggie to shine in a solo spot. But I can't resist having lots of things in pots clustered around it. I think of them as a sort of little backing group. Waggie and the Echeverias. It's not exactly a snappy name for a band, is it? 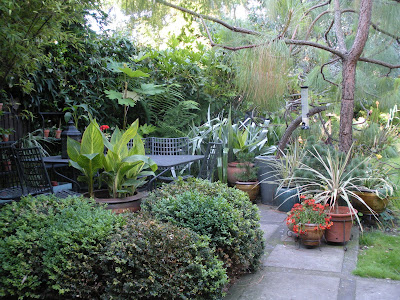 The cannas were really held back by the cold temperatures in June, but they're now beginning to get under way, thank goodness. I didn't get them out until the middle of May, which I now regret because they could have made an earlier start. But who knew the spring was going to be so nice? If I had got them out earlier, they would probably have got frosted...
The box is really suffering, however. I think the problem is drought, so we'll just have to see how they go.
End of the month view is hosted by Patient Gardener, so why not check out her blog and see how everyone else is getting on.
Posted by Victoria Summerley at 8:47 AM