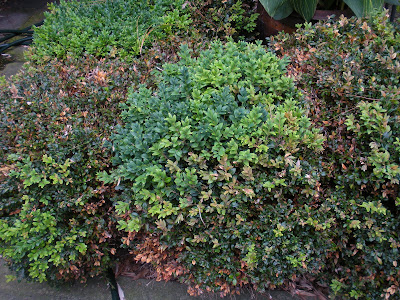 It's funny how much a holiday can really re-energise you, particularly if you have been looking at other people's gardens. I returned from Seattle (and yes, I will carry on with blogging about that) to discover that I couldn't stand the sight of my poxy box a moment longer.
Friends had suggested leaving it until after the garden opening, on the basis that visitors like to see that a garden isn't perfect. However, it seemed to me a bit unfair to inflict such an eyesore on the paying public. I know how hypercritical I (privately) am when I visit gardens. I wouldn't be too impressed if I saw this in someone else's garden. 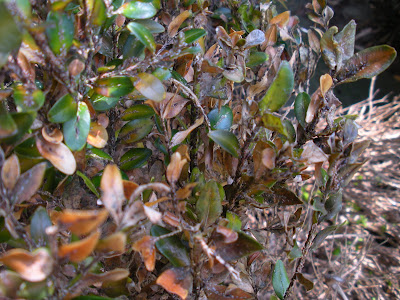 I didn't think the box had blight, but it had something. And since I have other box plants in the garden which, so far (touch boxwood), seem to be completely healthy, I decided I needed to find out what was bugging my box asap.
Three things were on my mind. First: could whatever was attacking the box live in the soil? Would I be able to replant box in the same place?
Second: how easy would it be to remove the box? Would it be a huge and difficult job?
Third: what would the soil be like underneath it? It grows in a space in the middle of the paving - I had visions of finding nothing but hardcore where there should be earth.
I live close enough to the RHS garden at Wisley to be able to drop in and use their advisory service. It's free to any member of the Royal Horticultural Society and you can also send samples to them for analysis in the post (for full details of the service, go here.)
I'd hardly got my sorry sample out of my bag before the horticultural advisor had nailed the diagnosis. "It's mussel scale," she said. "But let's have a look under the microscope and you can see what's going on." Yuck. There on the twig was what looked like a miniature mussel bed.
So what to do? The horticultural advisor said mussel scale was a slow-moving pest, but a really strong systemic insecticide was required to get rid of it, and it would probably need several applications.
I said I didn't want to use insecticide. I would rather dig the plants up and get rid of them, but first I needed to know whether mussel scale could survive in the soil and affect subsequent plants. Fair enough, said the advisor, and she called an entomologist colleague for further advice. He said that the mussel scale would not survive in the soil. However, he recommended leaving the site to overwinter before replanting with box, just to be on the same side.
I decided that I would dig up the box. I would possibly replant with box next spring, but not so much box - maybe three balls instead of six, interplanted with grasses, a la Diarmuid Gavin at Chelsea this year. Perhaps.
I finally got around to the digging out bit this afternoon. (4pm is my optimum time for projects in the garden, for some reason. Possibly because I need to be fortified by a cup of tea.) I don't think it's an exaggeration to say I have spent more time writing this post than I did digging out the box plants. To my surprise and delight, they came out really easily - mainly because they were in nice, reasonably deep soil. Hurray! 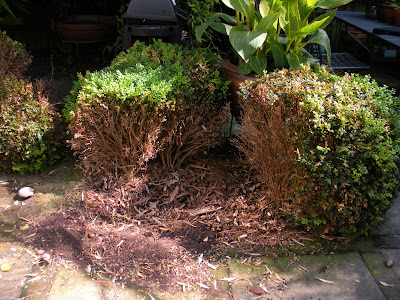 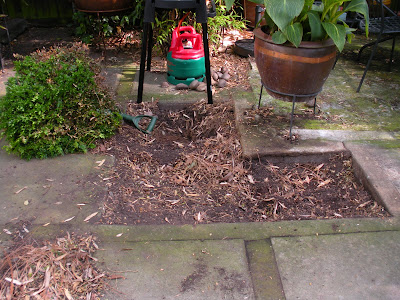 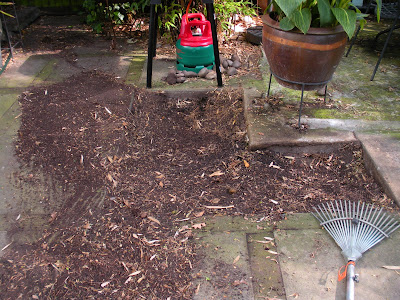 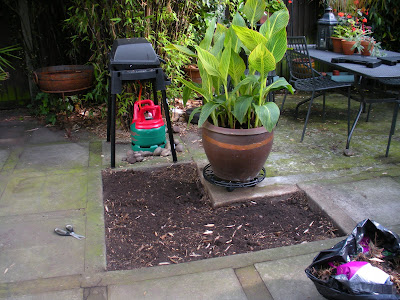 So what to plant? I nipped round to the garden centre. First thing I bought was a wheeled pot stand to put my cannas on. I'd been meaning to do that for years. Then I got some topsoil and manure to top up the soil level.
I decided that I didn't want anything too expensive in case I ripped it out next spring to make way for the box. So that ruled out anything exotic, but on the other hand, I wanted something that would fit with the rest of the garden. It also had to go with the cannas, which are 'Pretoria', and have bright orange flowers and striking green and yellow-striped leaves. 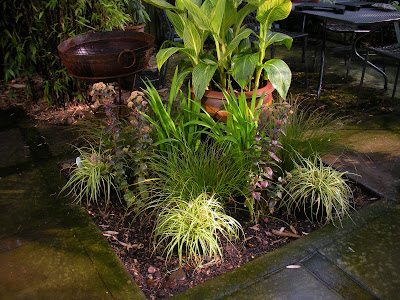 In the end, I decided on some crocosmia - this is 'Columbus', which I have already, and which seemed an appropriate choice for someone who likes visiting America.
I also chose some grasses (Carex testacea, a name which for some schoolgirlish reason always makes me want to giggle, and Carex oshimensis 'Evergold') and a purple-leaved sedum called 'Rainbow Xenox', which is supposed to change colour from yellow through to bronze. Hmm. I'll be amazed if they're anything other than dirty pink. I liked the foliage, though - contrasting with the grasses, it reminded me of the stone cairns we saw at the Bellevue Botanical Gardens in Seattle.
I love, love, love C. 'Evergold'. It is the most useful plant - it's quite drought-tolerant, it's evergreen and it looks like patches of sunlight. It does well in a pot, and I find it works very well when it comes to adding texture or softening edges - it's like adding a fur collar to a winter coat.
I'm going to dress the bed with pebbles and cobbles, but since I've just hoiked six 3ft box balls out of it, I'll let it settle for a couple of weeks and top it up again before I do.

Posted by Victoria Summerley at 7:09 PM