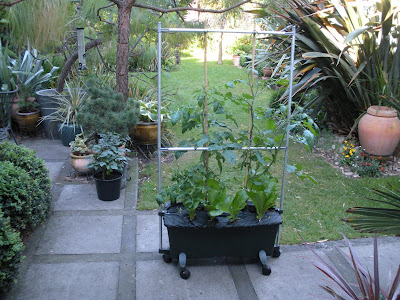 I’ve never been a great vegetable grower, more for lack of time and space than anything else. However, I do like home-grown tomatoes and this year I found the perfect way to plant them.

I bought an EarthBox, which sounds a bit like something a cat might use to relieve itself, but which in fact is a sort of windowbox on wheels.

You could be forgiven for thinking it was a solid gold windowbox on wheels, because I thought it was quite expensive considering that it is basically a plastic box.

I have to admit, the price really put me off, and I dithered for ages about whether to buy the plant support system that went with it too. The box was £35 and the staking system cost £25. I bought mine at Wisley, but you can buy them on Amazon.

Those of you who have allotments are probably rolling about on the floor laughing at my extravagance by now, but a, I bought the EarthBox with some gift vouchers that my family gave me for Christmas and b, I am now growing tomatoes and lettuce for the first time for years.

What’s wrong with a growbag, I hear you ask. Well, growbags are great (I used one to fill my EarthBox), but they are also static. And heavy. So you can’t whisk them out of the way if you suddenly decide you want that space for something else.

The EarthBox on the other hand, rolls gently across the patio out of the way if you have, say, people round for drinks and need more room for seats. You can also turn it round to follow the sun. And of course it is reusable.

I have lost the odd lettuce leaf to slugs and snails, but nothing major, which is pretty good considering I've done nothing to deter them.

The EarthBox is also self-watering. I think I have topped up the tank once since I assembled it, which given that this has been the hottest, driest spring for centuries, is pretty good.

Basically, there is a big reservoir in the bottom, which you fill via a plastic tube. You give the whole thing a good watering before you plant and from then on, the water is drawn up through the compost.

The cleverest bit, as far as I'm concerned, is what the manufacturers call a mulch cover. This is like a plastic shower cap that fits over the top of the box, which stops the water evaporating. The manufacturers are proud of the fact that it keeps weeds down, thus eliminating the need for herbicide. I must say, I laughed when I read this - the idea that you might need to resort to weedkiller in a space this small was hilarious. No, make that tragic.

I'm glad I bought the staking system, as it is very sturdy. It comes with a net for climbing plants, but I've tied in a couple of canes to support my tomatoes.

The manufacturers claim that the assembly instructions are foolproof, which is true, up to a point. However, if you've bought the staking system, you cannot assemble it after you have filled and planted the EarthBox. Again, if you have the staking system, the wheels from the basic EarthBox are used in a different way. I think the EarthBox instructions should make this clear.

The only other quibble I have is with the name. Rather than EarthBox, with its connotations of kitty litter, I think I would rechristen it The Moveable Feast.

Posted by Victoria Summerley at 8:27 AM