To the Chelsea Flower Show today for a sneak preview. The show doesn't open until Tuesday, and official press day and judging is tomorrow, so you'll have to forgive the odd untidy edge, or gardener person, or television camera skulking in the background.
I often spend so much time gossiping on press day that it's quite useful to go to the show on Sunday. That way, when people ask you what you think of a particular garden, you have actually seen it. These days, however, you bump into lots of people on the Sunday as well, so I've already done more than my fair share of Chelsea chat.
I thought on balance the general standard of the show gardens was good. The photographer Derek St Romaine said he thought it wasn't a vintage year, but it's not a bad year either. Some of the gardens I thought I'd hate, but I found I rather liked them. And despite all the doom-mongering about the bad winter, the dry spring, the heat and - today - the wind, the plants were in the main very good quality.
Here are some first impressions of the show gardens. 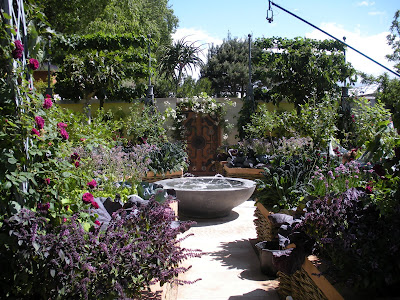 The M&G garden by Bunny Guinness. She describes it as a modern kitchen garden, but to me it seemed more of a romantic take on a potager. Vegetables planted in raised beds, with a colour scheme of purple and crimson. 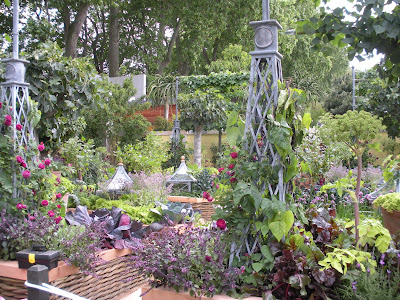 I think this garden will be popular with the public, because at first glance it looks very pretty, but I found it too cluttered. There were so many elements - raised beds, ornate cloches, trellis obelisks - it was difficult to see what was going on. 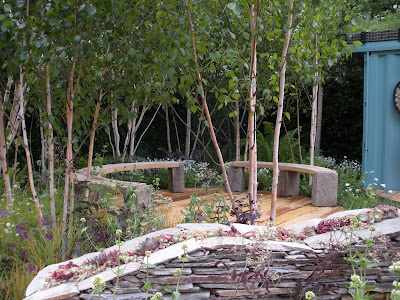 Nigel Dunnett's design for the Royal Bank of Canada's New Wild Garden. The wonderful oak and stone benches are by Henry Brudenell-Bruce and his Dartmoor Bench Company. 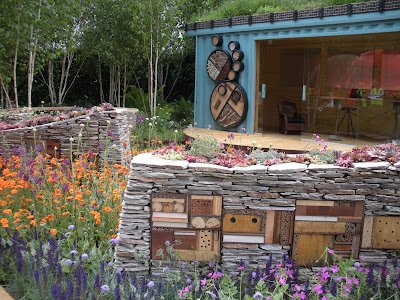 Professor Dunnett is Britain's green-roof pioneer, so as you'd expect, this garden ticks all the environmental boxes. According to Mark Gregory, whose Landform Consultants were the contractors on this garden, the habitat walls were a labour of love, involving hours and hours of meticulous work. I loved the colour scheme - the orange of the geums and the blue of the container shed - and the sempervivums planted in the tops of the walls. 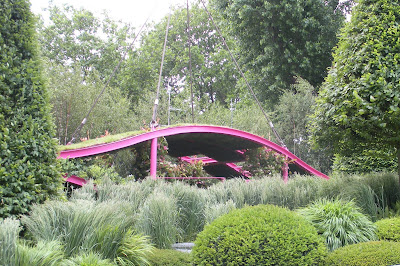 Diarmuid Gavin's Irish Sky Garden was one I had mentally filed under B for Bonkers, but I found myself first intrigued by it and then rather liking it. Diarmuid was kind enough to let us on to the garden, and into the flying pod, although we were unable to get airborne because of the high winds. The pod is suspended from a huge crane, which winches it in to the air. Because of the crane, the garden is big and has a great sense of spaciousness. 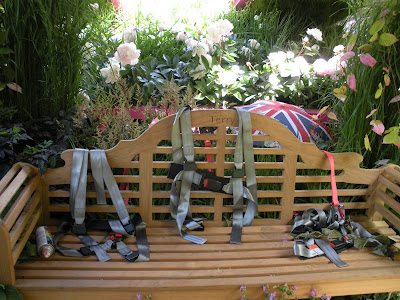 The pink pod - Wonka pink, as Diarmuid described it - contains two Lutyens benches fitted with seatbelts and carved with the names of his father and mother-in-law, who have both passed away. The pod is the most flowery bit of planting, with pale pink peonies picking up the "Wonka pink". Diarmuid said the idea was to try to make people feel relaxed and comfortable in case they were nervous when it came to lift-off. 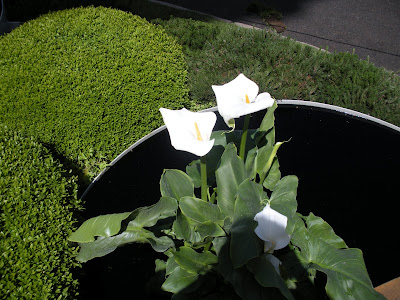 The rest of the garden is almost entirely green, apart from this Zantedeschia aethiopica. It's a very cushiony garden, composed of topiarised yew and box, and hummocks of grasses. I loved it, especially the way the path threaded you through the planting and up to the pod. 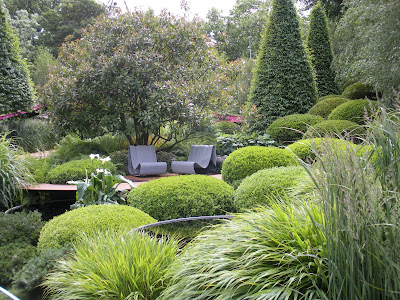 There are a series of pools in the garden, some of which are inky black, like the pools you see in bogs, while others have pebbles in them. Diarmuid says that by tomorrow, there will be fountains playing from pool to pool.
I'm wondering whether being a city dweller influenced my view of the Irish Sky Garden. In London, you tend to be grateful for any cool, green colour that comes your way. My colleague Anna Pavord said she thought it looked like a topiary catalogue. Anna lives in the middle of the Dorset countryside, so the idea of being surrounded by green is probably less of a novelty. And I rather like topiary, although I know a lot of people don't. 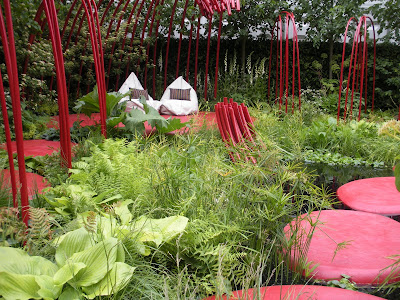 Perhaps it's just that I have a bit of a weakness for foliage, because I also liked Ann-Marie Powell's garden for the British Heart Foundation. The design is supposed to represent heart strings and corpuscles, and the only two dominant colours in the garden are the green of the leaves and the red of the arbour and stepping stones. 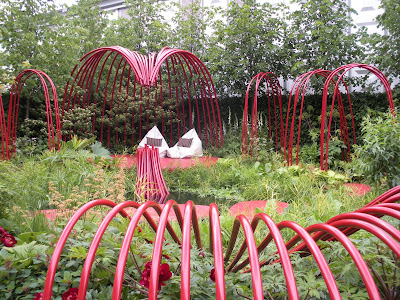 I like things in the garden to be useful as well as decorative, so I'm a bit allergic to structures for the sake of it. But the "heart strings" act as a pergola, or corridor, around the garden before arching up into an arbour that shelters a seating area. It felt like a lot of thought had gone into the concept. 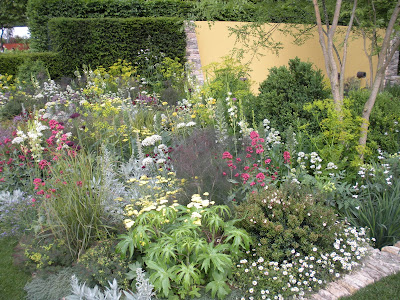 I knew I'd like this garden. Here's a master at work - Cleve West, for the Daily Telegraph. Gorgeous planting in quite a subdued palette, lifted by the silver centaurea and pale yellow achillea at one end of the scale, and the vibrant red of Dianthus cruentus and valerian (Centranthus ruber) at the other. 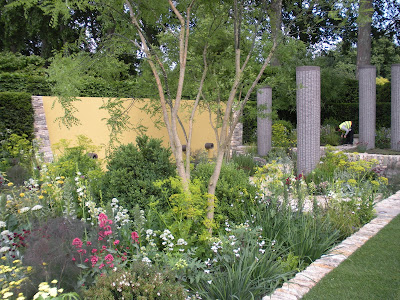 The columns, inspired by the Roman ruins at Ptolemais, in Libya, have a wonderful texture, while along the creamy yellow wall, a series of plain, chunky spouts pour water into a rill. 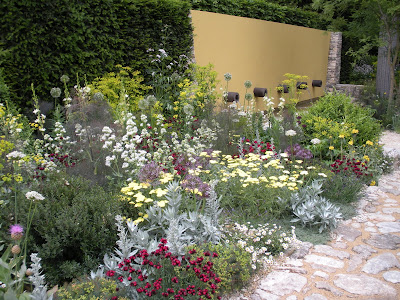 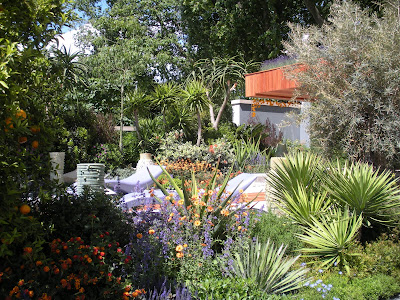 Here's another garden I didn't expect to like. It's the Monaco garden, designed by Sarah Eberle. I really admire her work, so was determined to keep an open mind, despite the fact that I found the sketch of her design a bit "meh", as my kids would say.
I was glad I did, because the more I looked at this garden, the more I liked it. I loved the colours - the exuberant orange geums and purple salvias, with the spikes of yuccas breaking up the straight lines of the hard landscaping. 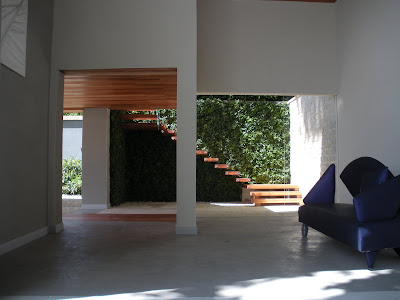 You must walk down the side of this garden, because otherwise you'll miss this "wow factor" interior, which gives on to the stair to the roof terrace. 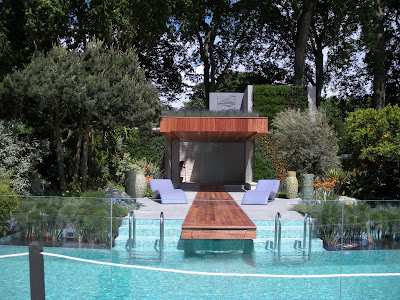 This is a very confident, hedonistic garden, and I could imagine sitting in it and feeling rather pleased with life.
Posted by Victoria Summerley at 9:40 PM