I am half-sick of shadows, said the Lady of Shalott 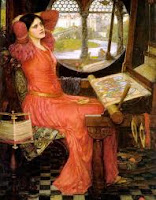 When people ask me what life as a modern journalist is like, equipped as we are with multimedia information technology, I usually reply that it is rather similar to that of the Lady of Shalott.
For those of you unfamiliar with Tennyson's poem, the Lady of Shalott is a mysterious woman - witch, queen, princess? Tennyson doesn't really say - who has been cursed for some equally mysterious reason. She must weave a magic web and see the world only through a mirror which reflects the activities in the world outside. If she looks directly at the world, or ventures outside, the curse will strike and she will die.
Journalism - certainly my job - is rather similar. I see what's going on in the world through the mirror of my computer screen while weaving the web that will eventually become a newspaper. It's very rare that I have time actually to go out and meet people, or to be present at a particular event. (Perhaps that's why I enjoy the Malvern, Chelsea and Hampton Court shows so much - for me, they usually involve the effort of going on a proper outing.)
I won't be cursed, of course, if I look away from the screen or go out - but I might miss my deadlines. There isn't room in my week for a lot of going here and there and doing this and that. I've already turned down three invitations to press launches next week.
I've always thought The Lady of Shalott is a terribly sad poem. In one sense, the thought of being locked in a tower, able to get on with your work without interruption, yet with one eye on the world outside, can seem rather cosy. Especially when it's raining (and especially when it's snowing).
But if you live that kind of life, it does often seem that the world is, literally, passing you by. You have no power to affect anything unless you go outside and join in. In which case, what do you do about that magic web (work, housework, children, more work) that is waiting to be woven?
What was Tennyson trying to say? That you can never reconcile the need for time to create something with the need to go out and find inspiration for the creative urge? It seems that, even at the height of Victorian romanticism, the work-life balance was an issue.
There's more to it than that, though. Real encounters with real people become the exception rather than the norm. That's good in a way, because I treasure these meetings. Sometimes, the cybersphere can actually help achieve this. There are many people I wouldn't have met if I didn't blog, for example.
However, there is a point at which virtual communication becomes a kind of sugar-rush substitute for human contact. Twitter, for example, I find a bit like listening to the radio when the station isn't tuned in properly. Conversations come and go, fade and return without me having much of a clue as to what is going on. Facebook can be the same - by the time you've caught up with an issue or a joke, there are 27 comments and yours seems a bit redundant.
It's frighteningly easy to spend two hours at your magic computer mirror feeling you have really made connections with people, only to get up and go and make a cup of tea in an empty house and feel their virtual company evaporate in an instant. Is this healthy? I'm not sure.
I'm going to stick to blogging. At least it has the benefit of allowing me freedom of expression, which is a kind of liberation from the curse of other people's parameters - deadlines, demands, and the tyranny of 140 characters. And Facebook genuinely keeps me in touch with dozens of old friends, and I value that contact. But I think I might give up on Twitter.
Posted by Victoria Summerley at 10:46 AM