When we first moved into our house, we had a climbing frame at the end of the garden, and either side of the little slide that came down from it were two cordylines. At that time, they were quite small - about 30ins tall. One went ages ago, when we built what is now the pond. The remaining one has grown into quite an attractive, multi-branched tree. 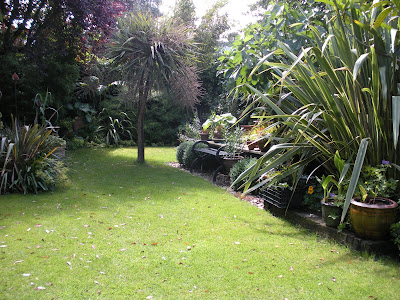 Every year, in late spring, it has spectacular flower sprays, which the bees love. It has always looked a bit odd, sticking up in the middle of the lawn, but I'm fond of it. However, since I've gravelled the area around the pond, this has created a long straight line along the right-hand side of the garden, which I don't like. Apart from anything, it makes the cordyline look even odder.
Solving the problem of how to make the tree look as if it belongs with everything else in the garden, and how to break that long stern line, has niggled away at me for years.
On Monday, my gardening group met at my house, and my friend Pamela, who is a garden designer came along. I told her I was willing to pay her whatever her fee was to sort the problem out. Pamela is an extremely generous person, and she immediately said not to worry about the fee and what was the problem? I told her, and she said: "Oh, that's an easy one." 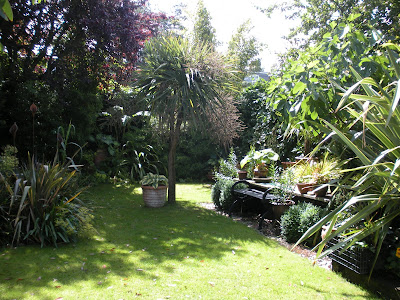 She got me to move a big pot with a huge hosta in it to the left of the tree. She said this would help tie the tree to the garden. Then, she said, I should deturf a rectangle around the tree, and gravel it, as I had done with the area around the pond. She said I should plant low-growing plants there, such as the Mexican daisy, Erigeron karvinskianus, which grows all over the garden. 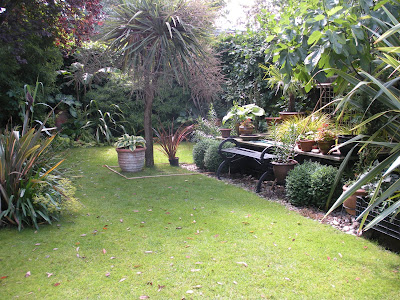 I thought this was a brilliant idea. I could hardly wait for today - Saturday - to get stuck into that turf. Every morning before I went to work, I gazed longingly out at it...
I always mark everything out with canes before I start on a new area - it gives you a pretty good idea of how things will look, and whether you've got the lines vaguely straight. 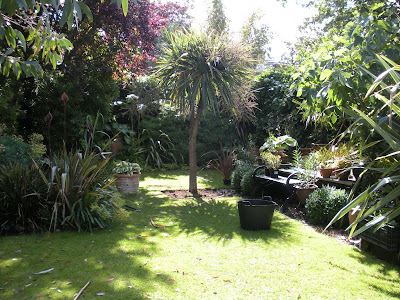 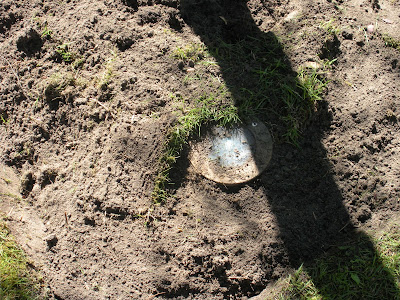 Oops, there's a light here, which illuminates the cordyline at night. I went round it very carefully, so as not to sever the cable or electrocute myself. 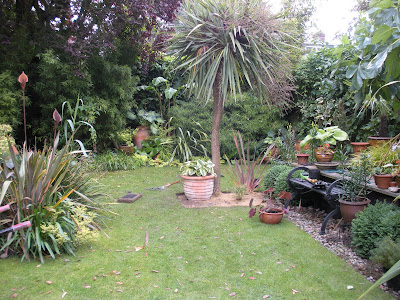 All I did when I put the gravel down round the pond was to lay a thick layer of sharp sand before putting down the stones. The sand is soft, so it's easy to level, and to bed the bigger stones in. You have to be sure where you want to put your plants as well - there's nothing more irritating than trying to dig a hole in the middle of a lot of small stones. 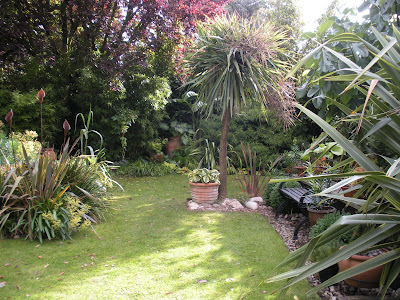 In the end, I used my hosta pot, plus a phormium that I had lying around (as you do). This is 'Sundowner' which will look fabulous with the afternoon sun shining through its leaves.
I didn't want to block the view behind, but just half-hide it, so that you want to go round and see what's there. With the phormium, I planted a couple of Euphorbia 'Ascot Rainbow'. I turned my nose up at this when I first saw it (another gimmicky euphorbia, I thought). The foliage is "grey-green, edged in yellow, flushed with shades of red, pink and orange. From early spring it bears clusters of lime-green flowers". Sounds ghastly, doesn't it? But it looks great in my garden. 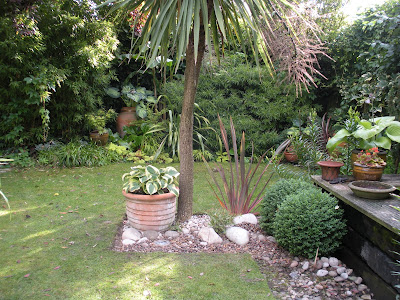 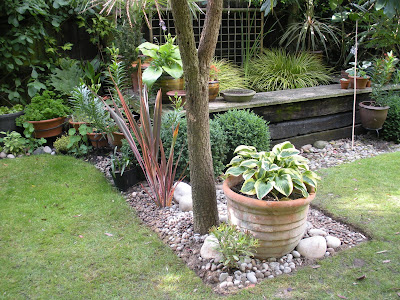 As every woman knows, you should always check the back view, too... 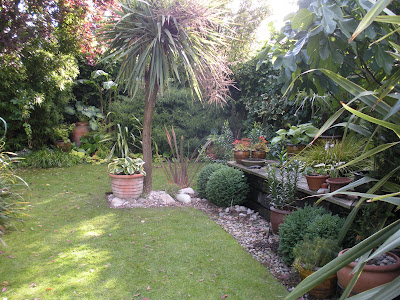 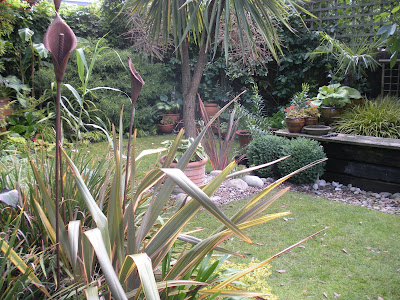 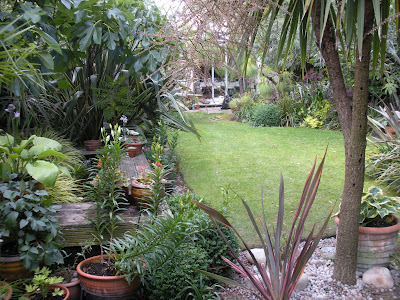 This is the view from behind the new bit. I love the way the view of the garden is now framed.
Thank you, Pamela! 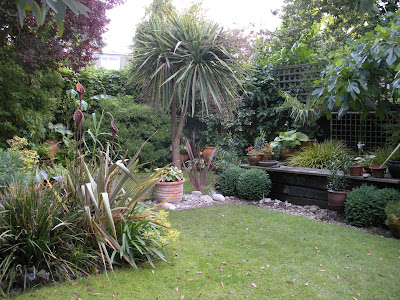 Posted by Victoria Summerley at 6:43 PM