Meet at Malvern Reunited (well, some of us, anyway) 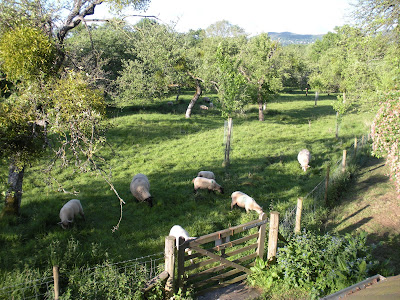 Wednesday
I set off for the Malvern Spring Gardening Show on a bright spring day, threading my way through the London traffic en route for the busy M40. Once you turn off at Oxford for the A44, the traffic evaporates and you can make steady progress through the Cotswold countryside.
It's a long journey, though - four hours, including a stop for lunch and supplies - and it was a relief to pitch up at our cottage in the middle of the Herefordshire countryside and find VP putting the kettle on.
I admired the view from my window (above), gulped down the tea, drew in a few deep breaths of fresh country air, and set off for Patient Gardener's house, where we were meeting our fellow bloggers: Artist's Garden, Elizabethm, Zoë, and Dobby, who is an honorary blogger.
PG had cooked us supper (salmon, new potatoes and salad, with various puddings), which was delicious, and although we missed the Malvern Class of 2010, it was nice to be able to hold a general conversation.
Thursday
Showtime! Press day at Malvern is also open to RHS and Three Counties members, so although it's not packed with people, there's a cheerful bustle. It's best to try to hit the Floral Marquee as early as you can as it fills up fast. I'd previewed Malvern, so I was able to go shopping or wander around in a dream with a clear conscience. I'd only got five paces into the marquee before I'd spent £20 and bought seven plants.
You can't buy at Chelsea (though you can place orders), and although the Hampton Court show is a good place to buy plants, it always seems a bit frantic. At Malvern, the growers seem much more relaxed; indeed, everyone seems much more relaxed. VP and I had lunch in the press tent (after a couple of glasses of Pimms, we were extremely relaxed), then set off to view the show gardens. 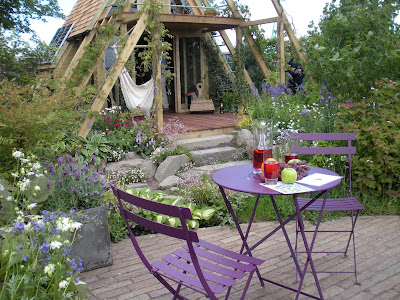 Two of these were outstanding, winning well-deserved gold medals. Above is the Graduate Gardeners' Garden For Life, which also won Best in Show. The A-frame building has solar panels and is designed to maximise the harvesting of rainwater. A greenhouse and bin store are built into the eaves, and the deck is made of eucalyptus, which is a sustainable hardwood.
Below is Hannah Genders' Bicycle Garden, in which everything was sourced from within cycling distance of the designer's home. What impressed me most about this garden was the fact that although most of the materials were recycled, the end result is very smart rather than fraying round the edges. It was a good, straightforward concept that really grabbed the public imagination, and it was brilliantly executed. 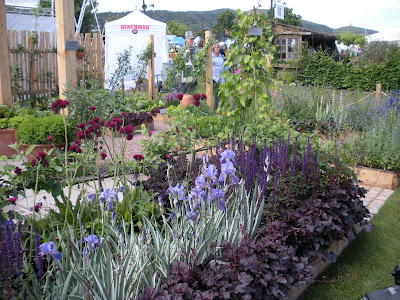 Here's Patient Gardener in the lecture theatre (below), trying to pretend she hasn't bought any plants. ("What, these old things? I've had them for ages.") Some more bloggers arrived to say hello - Trillium and Arabella Sock - much to the amazement of Becky Rochester from Timber Press. She was there looking after a couple of her writers, Neil Lucas and Noel Kingsbury, who were talking to James Alexander-Sinclair about their books. 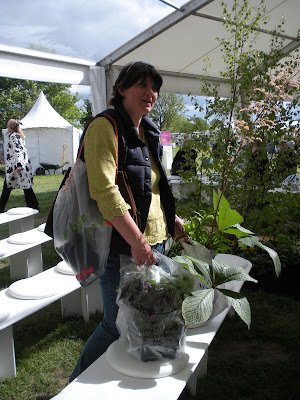 Yet more plant buying, followed by quite a lot of plant-purchase-picking-up. Finally left the show at 5.45pm, with only just enough time to scamper home and change for dinner. We met up with the others at the Malvern Hills Hotel and had a great evening followed by the usual furtive-looking car park rendezvous where various plant swaps were made.

Friday
Back to the show, so VP could file her Guardian blog post from the press tent, then it was off to meet PG who had very kindly agreed to drive us to Bryan's Ground (see earlier post). We were all shattered when we got back, so PG decided to have an early night, while VP and I went off to join the Socks and Lazy Trollop and her husband for a drink.
Saturday
VP and I went to hand the keys back to Ella at the Old Country House B&B and have a wander round the garden. It really is the most idyllic spot: the call of a cuckoo had woken us each morning. 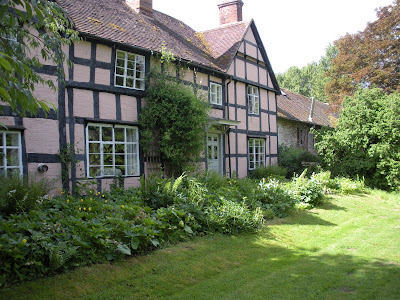 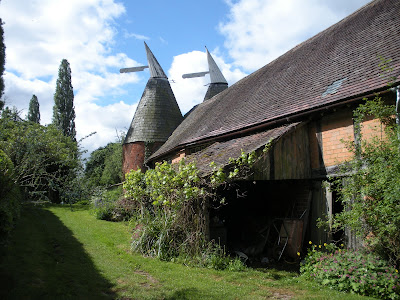 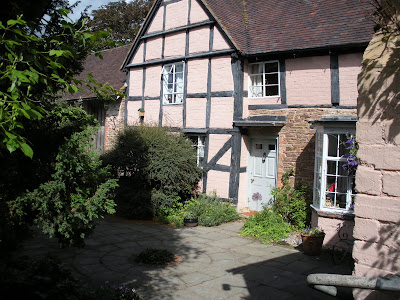 I'd had a look at a couple of hotels further into Malvern, thinking it might be more practical to be closer to the show (and everyone else). However, when you're in the middle of the gorgeous Herefordshire countryside, it's very difficult to imagine staying anywhere else.
Ella showed us a couple of the B&B rooms, one of which had a dear little bat asleep on an armchair. That clinched it. I am booking the Bat Room for next year. 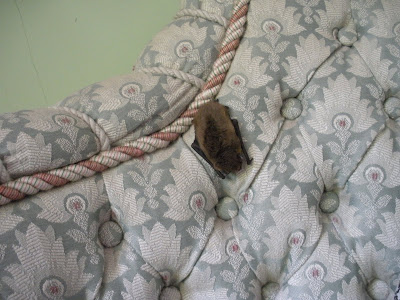 It's very difficult to tear yourself away from Malvern. I made one final visit to the show, and bought two huge Moroccan lanterns for the garden, plus a couple of dishes. Luckily, by this time, the boot of my car was full, so I had no choice but to go home.
It was lovely to get back and see the kids, but I'm already looking forward to Malvern 2012.
Posted by Victoria Summerley at 10:52 PM