Goodbye to Pushkin, the nicest cat in the whole world 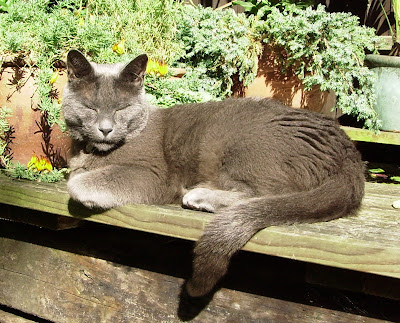 It's with great sadness that I have to tell you we said goodbye to Pushkin at the weekend.
Lots of you have been asking after him, which is really sweet, but I couldn't face writing about him until now.
As you know, he had a problem with his back, which turned out to be a form of arthritis. We took him to an orthopaedic vet, but he started to improve, so we decided to wait and see if this continued.
A couple of weeks later, without any warning, he lost the use of his back legs. He was able to heave himself about using his front paws, but it was awful to watch him trying to scramble up onto the sofa or try to get into a comfortable position to eat.
Although he liked the idea of eating, he started to eat less and less. We would hold the bowl at a comfortable height for him so he didn't have to strain, but he would still turn his head away after a couple of mouthfuls. He very quickly lost more and more weight.
At first, he still managed to struggle to his litter tray, but then the effort became too much and he started to soil himself. This in turn made him distressed, as he couldn't clean himself properly, so eventually we took the very difficult decision to have him put down.
The vet was in complete agreement with this, and on Saturday we took him in to say goodbye. My daughter and I were in floods of tears and although my son was doing his "man of the family" thing at the vet's, bless him, once we got home he disappeared up to his room. He came down a couple of hours later with his eyes all red from crying. I don't blame him - I can feel tears pricking my eyes as I write about this even now.
As soon as the vet gave him the injection, Pushkin laid his head down as if he was exhausted. He probably was, poor baby. The vet said you could see what a release it was, and I think that's true.
But he has left a huge hole in our lives. He was a loyal and beautiful companion for 11 years, and he will always have a very special place in our hearts.
Posted by Victoria Summerley at 7:10 PM