Bryan's Ground: a triumph of art and craft

I've spent the last few days at the Malvern Spring Gardening Show, and I'll post about that very soon. First, however, I want to talk about Bryan's Ground. It's a garden that I've wanted to visit for a long time; a garden with which you too may be familiar, if you have ever read the gardening magazine Hortus.
Like Hortus, Bryan's Ground is the creation of David Wheeler and Simon Dorrell, who moved here in 1993. The house itself was built in 1912, and is typical of the Arts and Crafts period. But it is Wheeler and Dorrell's art and craft that has transformed this building from what could have been just another large, almost suburban mock-Tudor home, and given it a new life at the heart of this extraordinary garden. Originally cream, with black beams, it is now a soft ochre, which seems both to have aged it by a couple of centuries and rooted it in the landscape. 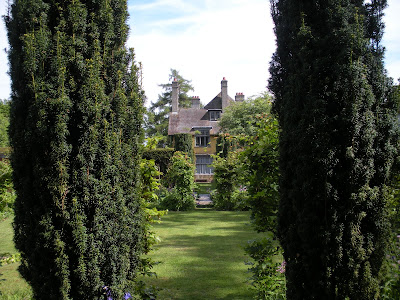 So why did I like Bryan's Ground? Well, it has that sense of stillness that all great gardens have. It's difficult to describe, but it's like the garden equivalent of self-confidence and poise. It reminds me a bit of Great Dixter - with the same delightful shagginess around the edges - but this garden is much more art-directed than Dixter.
Christopher Lloyd made some dramatic changes at Great Dixter, but in the main he adhered to the original layout of the garden which of necessity also resulted in compromises (roses in the Exotic Garden, for example). If there are compromises at Bryan's Ground, I didn't spot them.
Wherever you look at Bryan's Ground, from every angle, there is a focal point, or a view across an interesting piece of planting or topiary. Vistas and verticals - for me, that's what Bryan's Ground is about.
Have you ever noticed that, when people describe gardens, they describe them in horizontal, or two-dimensional terms? Borders, lawns, paths, walls, trellises - we think of them all as linear features. Yet when we draw, we tend to start with the vertical lines - the walls of a house, the outline of a human figure, the trunk of a tree, the stem of a flower.
Maybe that's why we feel instinctively comfortable with yew pillars and hedges and topiary. They fill the field of vision in a very satisfyingly solid way. 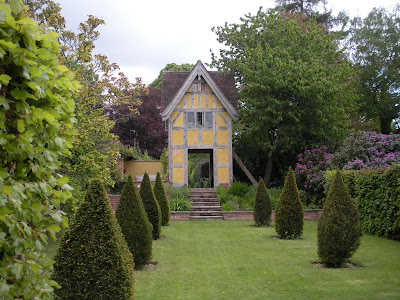 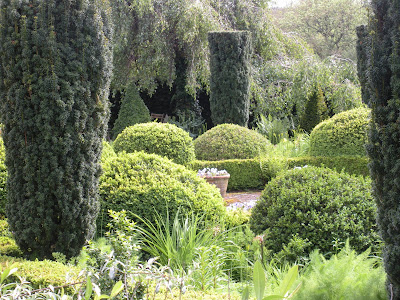 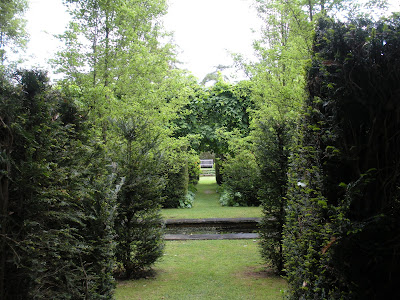 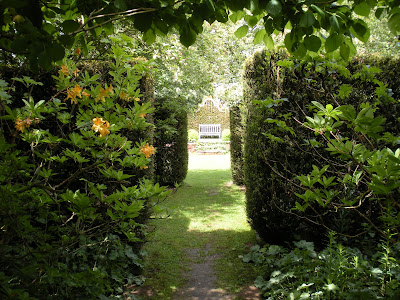 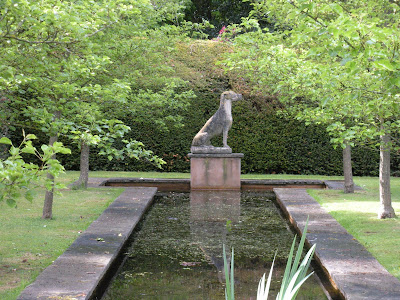 There's also a very whimsical side to Bryan's Ground, however. All sorts of "found" objects have been pressed into service as architectural or decorative details, such as the pediment below, which is made from bits of scrap metal and wood. There's no attempt to paint them or pretend they are anything other than what they are, which stops them falling into the category of knick-knackery. 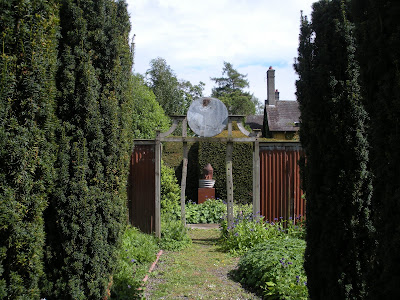 I loved the bondage lady, below, and the way the gargoyle seems to be gazing at her as if he's trying to summon up the courage to ask her out. 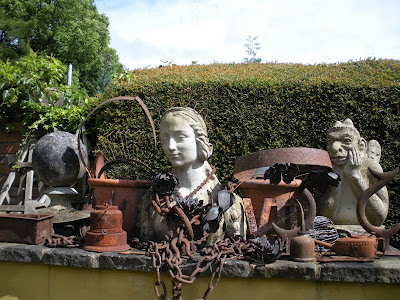 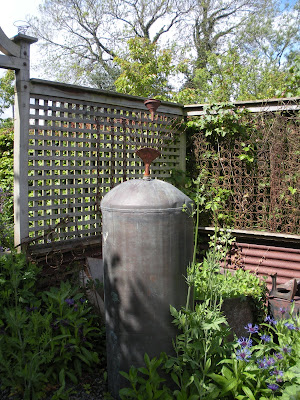 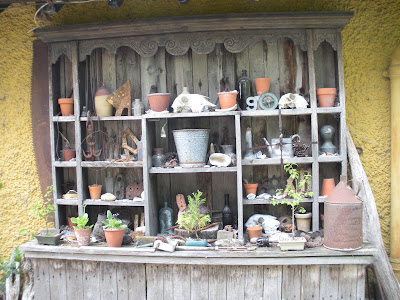 You pass this dresser on the way into the garden. It's full of pots and funny little objects and mini bonsai. It's the equivalent of the place in your house where you dump your keys, and the mail, and any odd bits and pieces for which you can't instantly find a home. 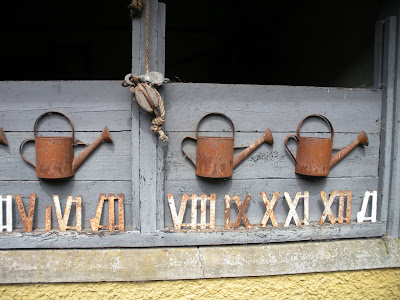 I wanted one of these semi-circular watering cans, which are perfect for hanging on the wall. Simon Dorrell thinks the Roman numerals might once have been part of a floral clock - they originally had little spikes with which to hold them in the ground. 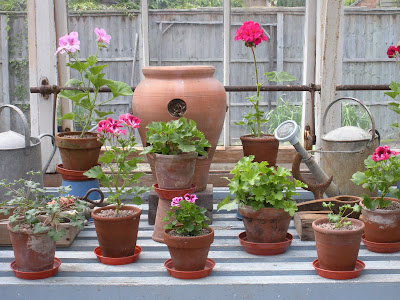 Inside the greenhouse, where succulents and geraniums bask around a Moorish fountain. 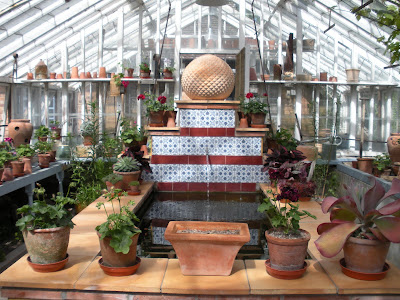 I can feel the plantaholics among you becoming slightly restless, fidgeting in your seats and muttering: "Yes, Victoria, but what about the plants?" Well, like most good gardens, Bryan's Ground has its signature plants. There is Eleagnus pungens 'Quicksilver', which you can see erupting like a silver fountain in the picture below. This is a deciduous large shrub or small tree, which in May and June produces small creamy flowers which from a distance look a bit like the flowers of Christmas box and are also scented. There are several of these at Bryan's Ground and on the day I visited, they filled the garden with a subtle, spicy perfume. 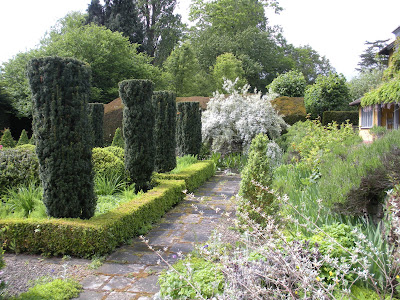 Another signature plant is the Iris sibirica (I'm guessing 'Papillon') which fill the beds either side of the serpentine canal in front of the house. 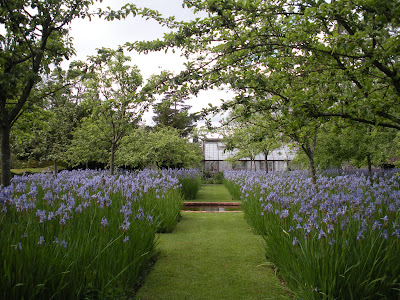 If you look through the grid of iris beds, the canal appears to be a series of circular pools, half hidden by the flowers. 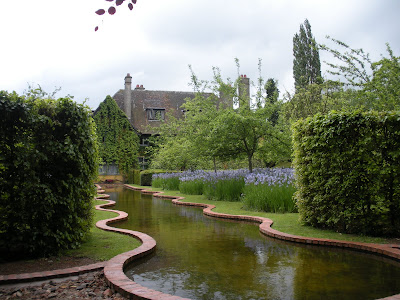 Seen from the front, the curving edge is very dramatic. 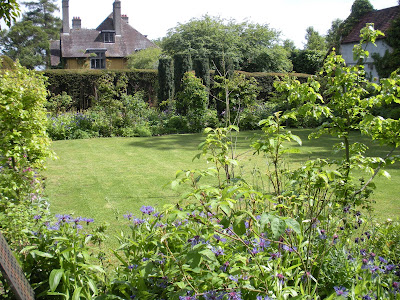 Other favourite plants appear to be Centaurea montana, or perennial cornflower, and spring flowering perennials such as thalictrum (below) and aquilegias. 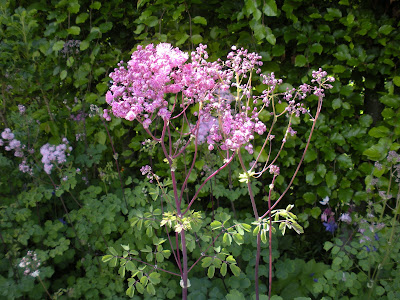 In such a theatrical garden, it is only right that there is an actual theatre. I could just imagine a string quartet playing here, or perhaps a recital of baroque arias. Messrs Wheeler and Dorrell, I applaud you. 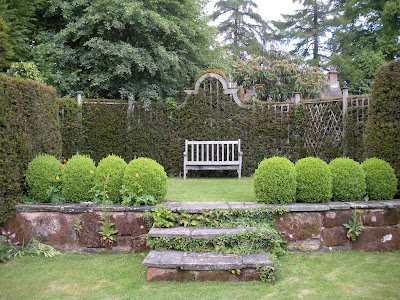 Posted by Victoria Summerley at 12:26 AM