I had intended to post lots more pictures of Chelsea show gardens and wonderful plants from the Great Pavilion displays. However, as I said to Emily when she commented on my last post, unknown to me, my art-student son had removed the memory card from my camera, and I'd barely got inside the pavilion when the memory ran out. (The camera has its own memory, but it's not very big. A bit like mine.)
I was very cross, but when I, erm, remonstrated later with my son, he said it was my fault for not checking my camera before I went out. Honestly, teenagers!
So, what did I make of Chelsea? Not that much, really. It's not a vintage year, and there wasn't really anything that made my heart beat faster. To be completely honest, the best bit was bumping into old friends, and meeting Anne Wareham, who has been a huge support to me, and gossiping to Emma, and having VP to stay. It was wonderful to be able to show VP round my garden - and I can't tell you what bliss it was to sit down and watch the Chelsea Flower Show television coverage with another gardener. So I think it will be a Chelsea that I'll remember for people rather than plants.
Here are the non-gardening highlights: 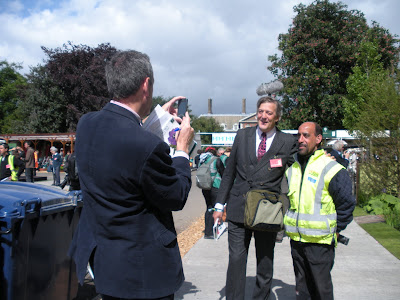 The chap in the middle is, of course, Stephen Fry, who is a very charming man indeed. He'd been approached by the man in the hi-viz vest who had asked if he could take a picture of him on his cellphone "for his daughter". Of course he could, said Mr Fry, but why not be in the picture himself as well?
The man holding the cellphone is Valentine Low, who writes for The Times, and is the author of One Man And His Dig, about his allotment. (He's also an old colleague of mine from the Evening Standard.) He was in the middle of interviewing Stephen Fry when the man in the hi-viz vest came along, so he was pressed into service as official photographer. Hi-viz Man was so thrilled, he dropped his walkie-talkie. So sweet! 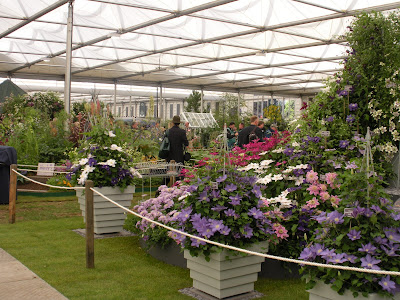 This is the first thing I saw as I entered the Great Pavilion. There's always a wonderful sense of anticipation as you look around and decide where to go first. However, I bumped into Cleve West just about here and so failed to notice whose gorgeous clematis display this was.
There's always a steel band playing in the marquee on press day, on one of the Caribbean displays, and the big nurseries serve champagne, so there's a kind of carnival atmosphere. You see celebrities like Ringo Starr and Rod Stewart strolling around, and in the middle of all the excitement, there will be Anna Pavord or Graham Rice studiously taking copious notes on some new plant as if all the brouhaha was a million miles away. 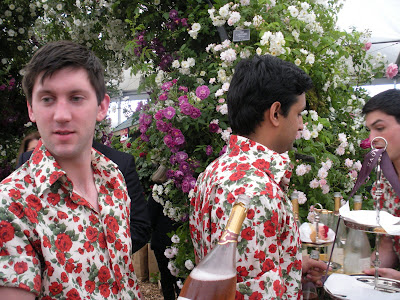 I loved these guys in their rosy shirts serving rosé fizz. They were at the Peter Beales roses stand (naturally), where the Highgrove Rose was being launched by Prince Charles later that afternoon. It was when I took this picture that the camera's memory ran out. So there was nothing for it but to stay and have a glass of pink champagne and a gossip with Valentine. It's a hard life being a hack. 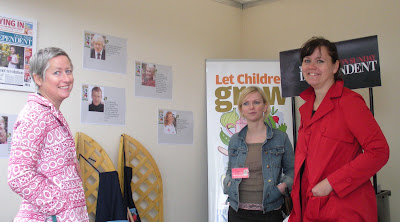 Lovely Emma! With lovely Lisa, left, who edits the Independent on Sunday's Sunday Review. Aren't I lucky to have such nice colleagues? Look at Emma's red coat - it made spotting her in the crowds really easy.

Posted by Victoria Summerley at 10:09 PM