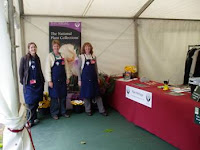 To the Chelsea Flower Show on Saturday, but in a different guise this time. I was doing my volunteer stint for Plant Heritage, formerly the National Council for the Conservation of Plants and Gardens, who were running the cloakroom at the show. If you're going to Chelsea, the cloakroom is a very useful place to know. It's by the London Gate (at the Sloane Square end of the show) and it never seems to run out of space. If you've brought a bulky coat in the expectation of freezing rain, or the sort of garden ornaments that endanger the eyes of passers-by as you carry them around, head straight there. All the donations people give in return for leaving their coat/suitcase/picnic basket go to Plant Heritage and this year we raised £4,145. You can find out all about Plant Heritage and the work they do here.
I stopped to say hello to my Independent on Sunday colleague Lisa Markwell, whose daughter Terri was doing a wonderful job on their stand giving away posters for their Let Children Grow campaign, which aims to get schoolchildren cultivating and eating their own food. There was a lot of interest in the posters, which I'm sure was partly due to people being so enchanted by Terri. I loved the way she shouted: "Spread the word!"
I also stopped to say hello to my friend David Rhodes, but he'd gone for the day so I congratulated his partner John Rockcliffe on the gold medal they won this year for their begonia display. David, if you're reading this, congratulations too!
When I finally arrived at the cloakroom, I found we also had a younger helper: Helena, the daughter of one of the Plant Heritage volunteers. Chelsea is not incredibly child-friendly - pushchairs and children under five are banned because of the crush - but again, people just seemed to love the sight of a child helping to run things. I'm sure Helena's efforts helped raise the number of donations we were given.
Posted by Victoria Summerley at 11:15 AM