And so to the Chelsea Flower Show, for press day, which as Emmat has observed, has become a bit of a junket. It's a chance to gossip, to meet friends, to gawp shamelessly at celebrities, drink free champagne and generally have a nice time. Oh, and look a few gardens, perhaps.
I'm useless at spotting celebrities. I'm always the one going: "Where? Where?" 15 minutes after they've sauntered past. But I am capable (just about) of spotting a trend, and the trend at Chelsea this year seemed to be towards naturalistic planting in quite a subdued, restrained range of colours, with a lot of burgundy (flowers and foliage) set off by green and white. 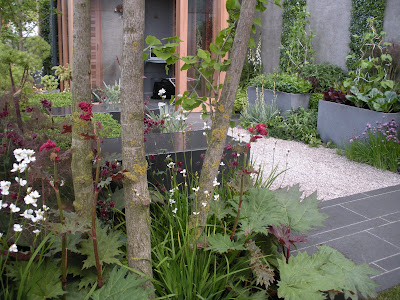 This is the Children's Society garden, designed by Mark Gregory, in the Urban Garden category. He won a gold medal for his garden for the same charity at Chelsea last year. That was the front garden, and this is the back, which has a garden office (working from home allows you to see more of the family as well as reducing your carbon footprint) and raised beds for veg. The white flowers on the left are libertia, which was also used to great effect in the Daily Telegraph garden, below, designed by Ulf Nordfjell. The concept is a cottage garden for the 21st century. Again, there's a lot of libertia, including some in pots. I'm all for this particular trend, especially as libertia self-seeds in my garden like crazy. I may start a little libertia factory. 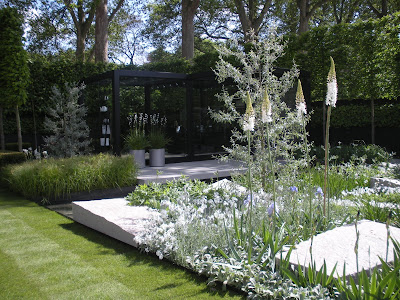 Emma and I both liked The Key, below, the Eden Project's garden which took homelessness as its theme. We thought some people might think it was too messy, and there certainly were some elements that seemed a bit chaotic, but there was something cheering about it. I liked the way the sprawly planting contrasted with the posts at the back. There was a kind of "Who gives a ..." atmosphere that was rather beguiling. 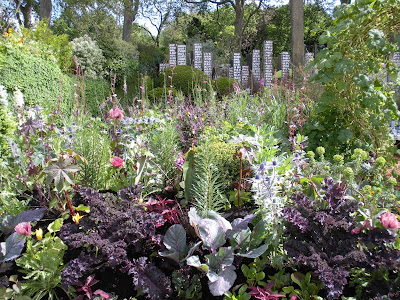 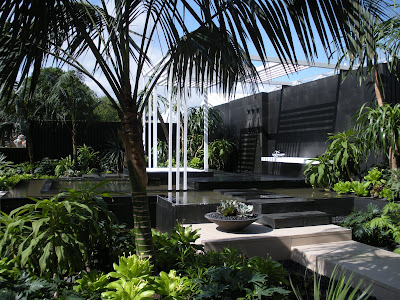 In total contrast, the Canary Islands' Spa Garden, above, was all sophisticated edges and sub-tropical plants. I really liked it, but eavesdropping on the people around me ("Love it!" "You're joking, I hate it!"), it seemed to be dividing opinion. I loved the uncompromising use of green - there were no flowers at all as far as I could see, though it did include things like Geranium maderense - and the way the shapes of the plants played against the straight lines of the hard landscaping. I guess some will say that it's too commercial, too much like corporate planting.
My colleague Anna Pavord thought the same about the Laurent-Perrier garden, designed by Luciano Giubbilei. I was amused to see that everyone referred to him as Luciano, rather than attempt to pronounce his surname. I thought this garden was a shoo-in to win best in show, but Anna thought it was "like a hotel garden". 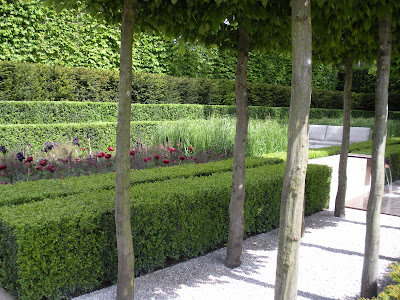 Posted by Victoria Summerley at 3:17 PM