The axeman cometh (closely followed by the debt collector) 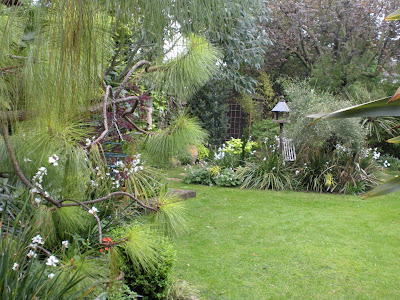 Yes, as you may have guessed from the title of this post, I've had the tree surgeons in. It must be a great job. Swinging from branch to branch, being out in the fresh air all day, high enough above the rest of the world to feel a certain sort of superiority. I'd go and retrain as a tree surgeon right away if it wasn't for two things: I get dizzy if I stand on a chair, and I'm so clumsy, I'd probably chop off my leg the minute I picked up a chainsaw.
The tree surgeons were dealing with the big purple-leaved plum at the end of the garden. It's a lovely tree, but it gets quite big, and casts quite a lot of shade. The fact that the leaves are purple makes it seem even darker, so I gritted my teeth and called in Edward Payne & Co, who had been recommended by my friend Georgina. She opens for the Yellow Book, so I know she has high standards.
I was impressed by the fact that they seemed reluctant to plough ahead without having a good think about it first, and that they were worried about whether a nest in the middle of the tree might be inhabited. It turned out to be an empty squirrel's nest.
The tree surgeons were closely followed by the electrician. I want to put a dedicated socket for the pond pump somewhere near the pond. At the moment, miles of unprotected cable runs all the way round the garden, cobbled together by moi with the help of a waterproof cable connector, underpinned by the safety net of an RCD (the circuit breaker - you can tell I've been talking to an electrician, can't you? It stands for Residual Current Detector). The circuit breaker protects me, sure, but it's prudent to have armoured cabling too.
After paying for all this, I'm expecting a knock on the door from the bailiffs. Springtime is so expensive. 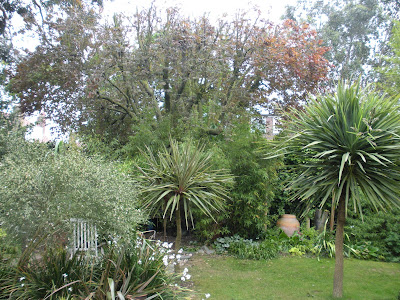 The cherry tree, after pruning. It's difficult to cut a tree back like this without it looking too "scalped", but I think they've done a pretty good job. 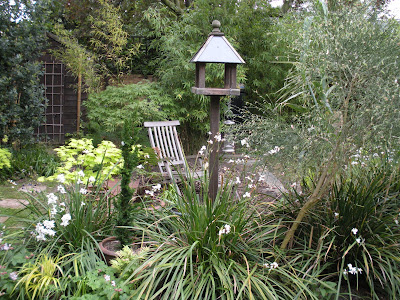 It's so nice not to have a trampoline! This area is not so much a work in progress as an idea waiting to occur, but that's quite exciting in its own way.
Posted by Victoria Summerley at 11:12 AM