A tale of two town mice 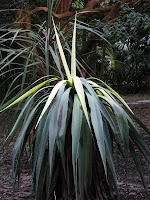 Goodness, I'm such a townie. I never really quite realised before. I went to Cornwall last week, to Falmouth to be exact. I was accompanying my son, who wanted to attend the open day at University College Falmouth, where he thought he might like to study fine art.
Gorgeous Cornwall, with its fabulous countryside and glorious seascapes; full of artistic communities, wonderful light and good seafood too. Where could be better to spend three years of student life?
It's a long way to Cornwall from London. Five to six hours on the train, give or take a missed connection at Truro and frozen points at Newton Abbot. Still, we felt a thrill of excitement as the Penzance express nosed its way through the snowy countryside like an excitable dog let off the lead to pursue beguiling scents. And even when we missed the Falmouth train (the express was running 10 minutes late) and had to wait for an hour on a freezing cold station, the glow of anticipation was only dimmed a little.
It dimmed a little more when we arrived at Falmouth Town station ("alight here for Woodland Campus") and found that there were no minicabs, no map that we could see, and certainly no people. (There are no station staff on this branch line, merely a notice that exhorts you to ring the national rail inquiry number if you have any queries.) And it was further dimmed when we finally arrived at our B&B after walking the entire length of the town to find that we should have alighted at Penmere station instead. (Penmere does not have a notice that says "alight here for Woodlane Campus". But it should.)
It's difficult to say what put me off Falmouth. It could have been the non-stop traffic. If you're going to spend five to six hours on a train getting away from London, it would be nice not to be mown down at the end of it by speeding Cornishmen and women. In London, motorists actually slow down sometimes so you can risk death by crossing the road. In Falmouth, the accepted practice seems to be to speed up, or honk your horn very loudly. (They hoot at each other too, not just Londoners.)
Apart from that, everyone was very friendly, especially the two ladies in the tourist information office, who were practically my best friends by the time I left. They seemed to be the only source of rail timetables, bus timetables, maps of the town and general information. If you ever visit Falmouth, do make them your first stop.
My son went off to his welcome session and fine art seminar and I wandered around the campus where there is a rather nice sub-tropical garden, with yuccas and cordylines and bamboo. It's called the Fox Rosehill garden and it was lovely, as you can see from the pictures. 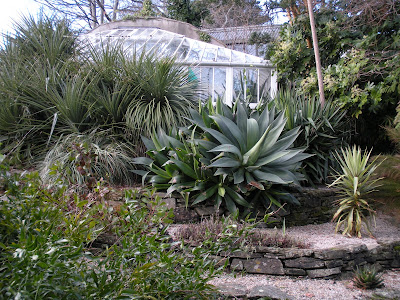 It wasn't until I was on the train home that I worked out what was missing. At Reading (half an hour from London) a family got on. The father was English and the mother was Spanish and I listened to her talking to her children with affectionate relief.
I think I'd felt nostalgic for the sheer polyglot international-ness of London. For the fact that you can walk down the street and hear Italian, Russian, Arabic, Gujerati, Spanish, Polish - half a dozen languages within a square mile. For the smell of French, Chinese, Indian, Vietnamese, Lebanese or Moroccan food wafting from restaurants around you.
When we arrived at Paddington, we found the Circle Line was out of commission for the weekend (as was part of the Northern Line, the Jubilee Line and the District Line). It turned the last part of our journey into something resembling one of those corporate bonding/problem-solving exercises. But it failed completely to dim my joy at returning home.

Posted by Victoria Summerley at 8:22 AM