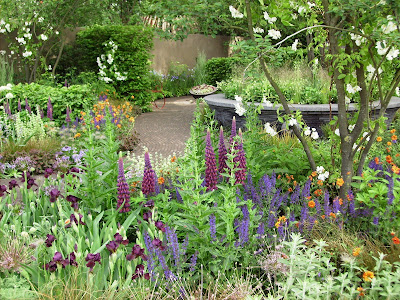 I was talking to the Royal Horticultural Society press office yesterday about tickets for the Chelsea Flower Show. Rules for allotting press passes are being tightened up and I wanted to make sure that my colleagues and I would get the passes we needed.
The discussion turned to the subject of people trying to get free tickets to the show, and I happened to mention that I would be volunteering for the Plant Heritage (formerly the NCCPG) cloakroom on the Saturday, as it was a, good fun, b, a good way to support a very worthwhile charity, and c, a great way to see the show yet another time (especially on the last day, when the plants are sold off and you can pick up a few bargains ...)
The nice lady in the press office told me the RHS is looking for volunteers too. They need people to man (person?) information points, sell guides to the show and even help out in the press office.
The great bonus is that very often you have to be on site before the show opens, so you'll be able to wander round without having to fight your way through crowds of people. It's a fantastic opportunity to see the show from backstage, as it were, and you'll never look at Chelsea quite the same way again.
It's not just Chelsea, but Hampton Court too, I think, and that goes for Plant Heritage, who have already sent round an email asking for volunteers to staff their marquee at Hampton Court. If you want to volunteer for the RHS, contact Elysa Rule in membership on 020 7821 3120 or elysarule@rhs.org.uk
The picture above is of Cleve West's garden for Bupa last year, which won a gold medal.
Posted by Victoria Summerley at 11:01 AM