February brings the snow (no, wait, that's not right...) 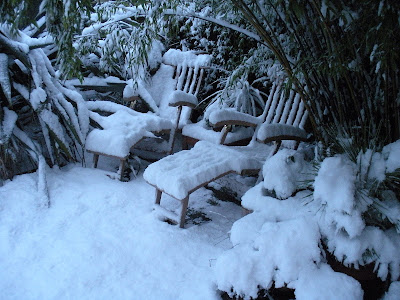 It usually takes only a dusting of snow to bring London to a halt, so four inches overnight has paralysed the city. My children and I watched the snow fall last night and only marvelled at how pretty it was. This is the worst snow for six years, and the worst winter for a long time in London, so it's rather sweet to see what a novelty it is for two otherwise fairly blasé urban teenagers. There's more snow to come this afternoon and tonight.
There are no buses running at all in London today. Gatwick is open but there is no Gatwick Express train service into London. London City Airport, in Docklands, is shut. Two of Heathrow's runways are shut. Most important of all (says my daughter), most of the schools are shut, including hers.
So here is the scene at Victoria's Backyard at 7.45am this morning. I had to cheat and shake the snow off the bamboo because it bends over and blocks the view completely. Bamboo seems to shrug off extremes of weather, but the snow weighs it right down. Last year, I gave the golden bamboo at the front an enthusiastic whack with a broom handle and two huge canes immediately broke in half. A gentle shake (if you can reach) is much more effective, and the canes spring up like a security guard roused from an illicit nap. 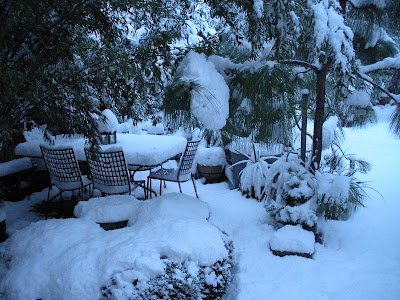 I was looking forward to photographing the garden in the snow (with my new camera!) but there seems to be so much snow, it has blurred all the outlines completely. I love the "cushions" on the steamer chairs though (see top picture) and the thick white tablecloth (above). I've tried to throw some birdfood out but it has already disappeared into the whiteness. I'll try to take some more pictures later, before I attempt the journey to work and before the next blizzard sweeps in from northern Russia. 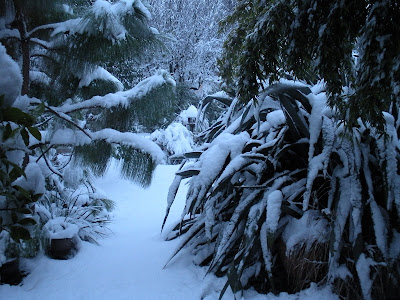 My daughter is talking about taking the sledge out to Wandsworth Common, which is a couple of streets away. In an idea world, however, I would be watching the snow from indoors. It's a bit like being inside a giant snowdome. 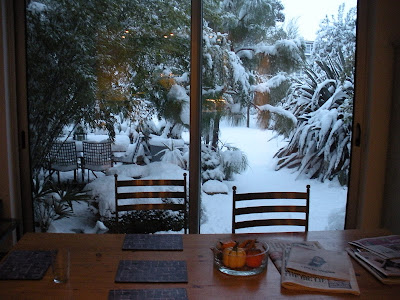 Posted by Victoria Summerley at 7:51 AM