I've been a staff journalist all my working life, and at least half of that (which is, erm, quite a long time) on evening papers, which as far as news is concerned, are the fastest things in the west. On a daily paper such as The Independent, where I've worked for the past eight years, you have all day (theoretically) to get the paper out. On an evening paper, such as the Evening Standard in London, where I worked for 10 years, you have around two hours. Then you tear it up and start again and two hours later, you have a new edition.
It's often struck me that lots of you bloggers would do very well on an evening paper, or on any newspaper, come to that. So many of you seem to be able to get your heads around an issue, research it, write a coherent post, and have an intelligent opinion on the subject, all in the space of a nanosecond.
There's just one problem with working to deadlines all the time, though. You tend to become a tiny bit of a last-minute merchant. Unless there is a pressing reason to find a solution to a problem, your brain doesn't quite see why it should make an effort. Now that the garden opening is in three weeks' time, however, it's been getting into gear. And when my colleague Anna Pavord, the Independent's gardening writer, rang me up and asked if she could come round next week and write a piece about the garden, my brain seemed finally to wake up and smell the decaf.
Take Thursday, which was my day off. I've been meaning all year (yes, eight months) to put a kind of step or bit of paving or something where the lawn meets the back of the garden. There's a shady bit under a purple cherry plum where I keep the compost bins, and the wheelbarrow, and spare pots, and all that stuff you tuck away somewhere out of sight. (Yes, I know the compost should be in a hotter, sunnier place, but the hotter, sunnier place is too valuable for plants to use it for compost bins.) There are some ferns there, and some bamboo, so it's quite civilised.
I 'd been thinking a bit of timber or paving would work, but how to make it look like it was meant to be there? Suddenly I had an idea: put some large cobbles either side of the plank, around the base of the bamboo. I half-buried them, so they'd look like they'd been there for a long time. It worked. (I'd like to thank AN at Garden Life for this idea because I'm sure it was looking at his fabulous garden in Japan and the other amazing pictures on his blog that inspired me.)
Next, what to do with the area in front of our plum tree (allegedly a fan-trained specimen on a small rootstock, but it thinks it's a giant redwood). I grow herbs there - oregano, thyme, mint, chives, the usual - but they tend to have small leaves, which look out of scale with the rest of the garden. It's always looked a mess, except in spring, when self-seeding forget-me-nots take over. I decided to try a half-barrel pond there, with a mini waterlily, and group pots of herbs around it. It's looking much better. Why didn't I think of that months ago?
Unfortunately, my brain was so busy coming up with solutions, it forgot to remind me to take 'before' photographs. Everything is still a bit of a work-in-progress, so I won't post any 'afters' until it's finished. Meanwhile, here's a picture of someone who does absolutely no work in the garden whatsoever. 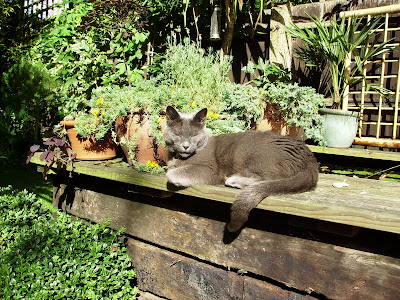 Posted by Victoria Summerley at 8:28 AM