An introduction to Pushkin 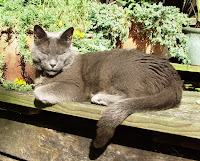 It's really rather rude of me not to have introduced you to my cat. He's a Russian Blue, a breed characterised by their grey fur and green eyes, so naturally we thought it was a frightfully witty, original idea to give him a Russian name. He is called Pushkin, after the great Russian writer and poet, Alexandr Sergeyevich Pushkin. Pushkin, pusskin, geddit? A quick trawl on the internet will show you that practically every other Russian Blue in the world is called Pushkin. So much for witty and original.
I did suggest other names, but these were shouted down by my children as being ridiculous or pretentious. I thought we could call him Dusty, short for Dostoevsky, which would be particularly suitable as he is the colour of those dust rabbits that lurk under the sofa. Or Khat, short for Khatchaturian. I was quite proud of this one, but it provoked particularly violent, pretend-sick, finger-down-the-throat reactions from the offspring. (Probably just as well: Khachaturian was born in Tbilisi, the capital of Georgia, so although he is considered a Soviet composer, he isn't Russian. Especially at the moment.)
The children came up with suggestions of their own. Elvis was one, I seem to recall. However, I thought I might feel a bit of a prat going out into the garden of an evening and shouting: "Elvis!" One has to consider these things.
Pushkin is quite an intelligent cat, and can sit on command and beg for food like a dog. (Actually, let's be honest here, he will sit on command and beg if there is guaranteed food on offer, that he can clearly see. No reward, no tricks: that's his motto. I told you he was smart.)
He has only two bad habits: he likes hiding under cars (as in automobiles) and he has a very loud yowl, like a Siamese. His favourite trick is to run out of the house and disappear under the car just as you're about to drive somewhere. This is nothing to do with not wanting us to go away. He just seems to like winding us up.
Posted by Victoria Summerley at 6:35 PM