Time to stop and eat the birthday cake

The work in the garden is continuing slowly, punctuated by thunderstorms, RHS conferences and social events. I had this week off (I worked over Easter weekend, so wanted to use up my lieu days before I forgot about them), so the idea was to get as much done outside as I could.
That plan didn't really come to fruition (when do they ever?), but I got a bit done. Most of the hard graft is now pretty much finished, which leaves the fun part of putting the plants in. But there are still decisions to be made.
In the meantime, I went to a fascinating conference hosted by the Royal Horticultural Society on the looming skills gap in the horticultural industry in the UK. It was chaired by Alan Titchmarsh, who did a fantastic job - particularly when it came to making the younger speakers feel at ease. I found all the speakers' words very moving and I know VP, who was with me, agreed. You can read her report here, and my column for the i newspaper here.
And last but not least, it was my darling daughter's 18th birthday, so the Summerley clan assembled for "fam-din" (family dinner), and tonight, as I write this, her friends are assembling for a party. They're hoping to use the garden, so I hope the weather gods are in a benevolent mood.
Birthdays always prompt you to take stock and I must say, I find the idea that my daughter is now a grown-up makes me feel a bit wistful. (She'll always be my baby, though - but don't tell her.) 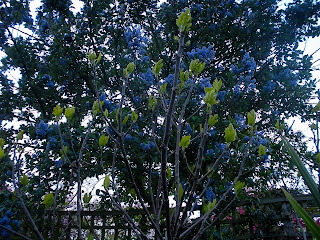 Friends were commiserating with me about the weather this morning, but although we've had lots of thunderstorms, and it has been quite chilly, I rather like that intense light you get just before or after a storm. Everything looks as if it has been digitally enhanced.
I love the contrast, for example, between the blue of my neighbour Ruth's ceanothus, and the new green of the leaves on my fig tree. The misty green of trees coming into leaf makes me feel wistful too - it's such a beautiful, fleeting moment. 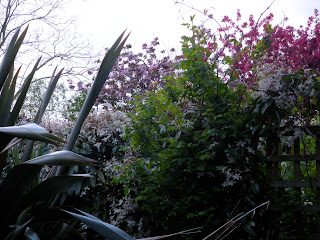 It's been a good year for Clematis armandii in the garden - this one is 'Appleblossom' and it looks gorgeous against the cherry blossom in Ruth's garden behind. 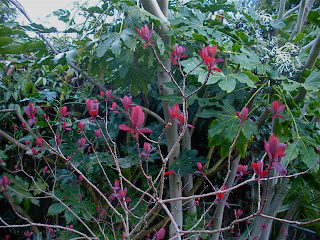 The new leaves of Cotinus cogyggria glow against the green of a fatsia. 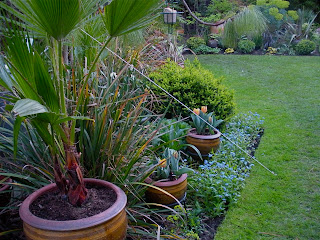 These pots of tulips are allegedly 'Prinses Irene'. They look a bit washed out - perhaps it's all the rain. I was expecting orange merged with pink, but they look more like very weak orange squash. My friend Pattie Barron says it's my fault for buying cheap bulbs from B&Q, instead of buying from a decent nursery and potting them up myself. I think she's absolutely right!
Posted by Victoria Summerley at 8:21 PM