I haven't posted about the garden for a while, mainly because I haven't had to time to post, or even to garden. However, things are slowly changing and this post is as much to remind me that I will eventually get there as it is to tell you what's going on.

Major changes so far have been the new tank and the new benches. Still to come is the new shed. In progress is the replanting of the Trampoline Border (as I still think of it). This had lots of Libertia formosa, which is a fantastic plant in many ways, but can start to look scruffy after a while. After a lot of effort with fork, spade and swear words, I managed to remove one clump today. Only four more to go... 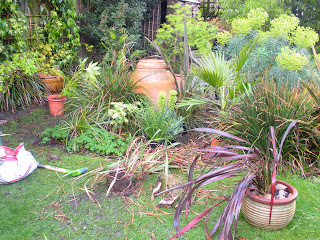 The trouble with a garden rejig is that when you straighten up and look around, there seems to be mess and stuff everywhere. I sometimes feel that my gardening life at the moment involves moving things from place to place, to get them out of the way. And then having moved them, I trip over them. 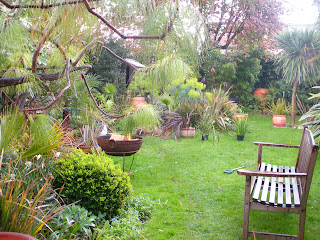 This bench, for example, is waiting to go to my neighbour, who wants to put it under his tree. He and his wife are away seeing the grandchildren for the Easter holidays, so I'll have to wait until next week before I see the back of it. 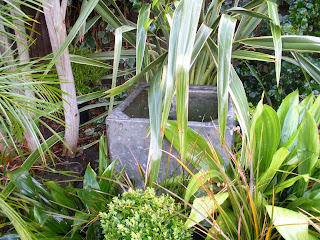 Hurray, here's a bit that's done (well, nearly done). This is my new (old) water tank, which I'm very pleased with. The big green leaves either side of it are Aspidistra elatior - yes, the houseplant favoured by boarding house landladies and Victorian drawing rooms. It's really hardy - the one on the left has been growing next to my shed and has survived extreme dry shade all that time. I felt it deserved a better life. 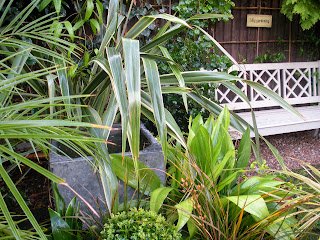 The bench is a new acquisition, replacing the one that's going to my neighbour. The old one was fine, but I wanted a new bench for the other side of the garden, and I wanted a lighter colour, so I got two to match. I got a good deal on them because I bought them last autumn, right at the end of the season. 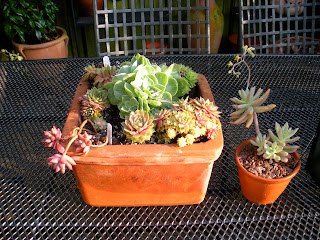 Part of the reason the garden makeover has taken so long is because I get distracted by other things. Here's a selection of succulents I bought at the RHS Great Plant Fair on Tuesday (I nipped in for an hour before going to work.) Have you ever seen that old television programme Supermarket Sweep, where you had to race down the aisles loading up the trolley with as much stuff as possible? It was a bit like that - Sempervivum Sweep. I had an extremely enjoyable time planting them up.
I bumped into Clive while I was there, and you can read his post here. And Fennel and Fern has posted about it here. It's a great show, but full of temptations. 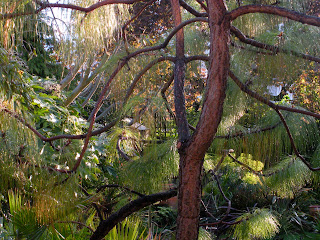 After a day of back-breaking toil, it's great to see the leaves glowing in the evening sun as you sit down with a cup of tea.
Posted by Victoria Summerley at 11:10 PM