I owe the title of this post to Rob, who organised a very jolly day out to the garden centres at Crews Hill, near Enfield in north London, last Sunday. I really enjoyed it: the sun shone (unexpectedly), I bought lots of fantastic things, Julia and her husband came too, and I was able to meet Mark and Gaz for the first time. We even managed to fit in a pub lunch. Bliss.
However, I've sub-titled it "part one", because I know that before I've got very much further with it, someone (hang on a minute, that's the doorbell) will interrupt me.
This has been a bit of a pattern this spring. And it might sound trivial, but it has really affected the way I've thought about the garden.
The first problem is time. I work the equivalent of full-time (in total number of hours), so stints in the garden are limited. In addition, life has a way of thwarting one's plans - on Saturday, for example, I had to spend the morning waiting in for the television repair man, and the Saturday before that, it was the drains man. You daren't go out and get stuck into planting in case they decide you're not at home and go away again.
Then there are the other mundane tasks that must be fitted in - laundry, shopping, cooking etc. By the time you've given a child a lift somewhere and chatted to your mum on the phone, your day has been neatly chopped up into bitesize pieces that don't really allow for any big tasks to be started, let alone completed.
The second problem is physical strength. I just haven't got the energy to heave compost or plants around any more, or split huge clumps, or even (when my hands and arms are suffering from a heavy day on the computer) do a lot of pruning. I hate always to be dependent on friends and family for help - apart from anything else, they're not always there when I need them.
The third problem is partly a result of the first two, plus the very cold winters we've had here in the UK. Planting exotics is always a gamble in terms of hardiness, but last year I began to wonder whether I was just being plain foolish.
I started looking around for hardier alternatives, and this - combined with the fact that I didn't want to have to lug huge plants into place - meant that the garden started to lose its jungly character. Everything looked smaller, somehow and out of scale with the exotic survivors which are now much bigger than they were when I first moved in.
So, what to do? I began to feel quite downcast. I also began to feel quite panicky and stressed+ - was I ever going to get any time to get outside and sort things out? How was I going to manage everything?
I'll tell you what happened in Part Two. 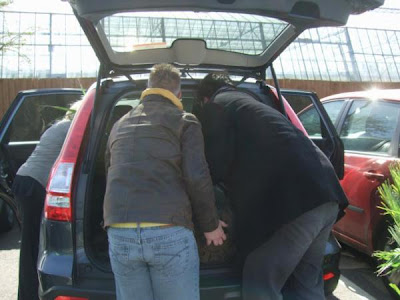 Me, Gaz and Rob loading plants into my car. I now know that with the seats down, it will take one big Washingtonia, five small ones, one tree fern, one large aspidistra, one Japanese maple, one fairly sizeable Phoenix roebelinii, and various other assorted perennials.
Posted by Victoria Summerley at 5:27 PM