I visited the Palm Centre in Ham, on the fringe of south-west London, today. I'm ashamed to say I've never been before, having always assumed that the journey would involve hours of traffic jams and roadworks along the South Circular. However, I've now found an alternative route and got there in a fairly relaxed frame of mind in about 30 minutes.
Ham is a very, very pretty London "village". It's part of Richmond, but has its own common and is bounded on one side by Richmond Park, the hunting ground of kings, with its ancient oaks and red deer.
I'm giving you all the guidebook stuff for the benefit of those who don't know London very well. If it's any consolation, even we blase Londoners, who take all our history for granted as we zoom past it, are sometimes brought up short by the notion that we might be driving where the doomed Charles I might have ridden with his courtiers.
Ham dates back to the 11th century, but it's famous today for its Georgian houses, and for Ham House - built in 1610, and one of the best surviving examples of a 17th century mansion. Next door to Ham House is the Palm Centre. As you can imagine, it's a very pleasant place to spend a nice Sunday afternoon. 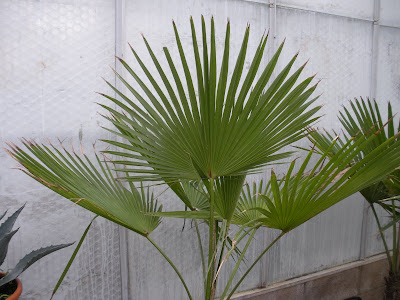 I had a list of things I wanted (having researched the website beforehand), but promptly found myself deviating from it the minute I entered the nursery. I wanted a hardy palm with exaggerated fan-shaped leaves, such as this Trachycarpus martianus, above, to replace a Washingtonia robusta that had been finally defeated by two appalling winters.
Instead, I found myself drifting towards these miniature coconut palms, Lytocaryum weddelianum, below, which were clearly marked as not hardy at all. They were the most delightful plants, though, with delicate feathery fronds. 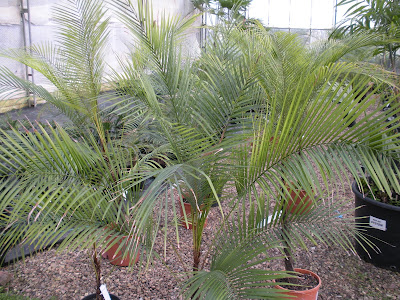 The Palm Centre doesn't just sell palms of course, but also specialises in bamboo, tree ferns, and other exotica such as agaves. These cycads below made me giggle. 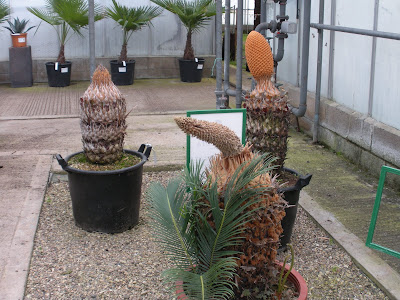 I bought a fern - Dryopteris wallichiana, which is fairly tolerant of dry shade and whose new leaves are a wonderful yellowy green. And instead of a T martianus, the price and weight of which made me wince, I purchased a "waggie" - Trachycarpus wagnerianus, or the miniature Chusan palm. It's not the palm that's miniature but the leaves, which are smaller and firmer than T fortunei and give a very formal, ruffled effect.
Naturally, the moment I got it home I decided not to put it in any of the places I'd had in mind for it, but somewhere different altogether. Oh, dear, I'll have to go back and get a T martianus after all... 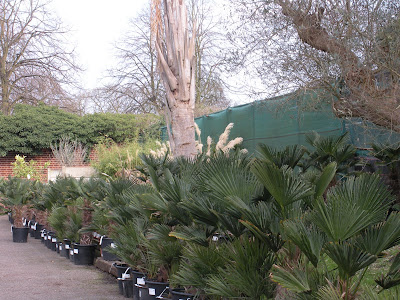 Posted by Victoria Summerley at 9:00 PM