The case of the missing loppers and other tool tales 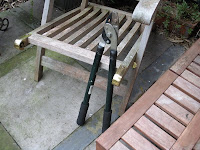 I have a terrible habit of losing tools. Don't ask me how it is possible to lose tools that are either brightly coloured or quite big, in a town garden that is fenced all the way round. Just take my word for it - it happens all the time.
So far, I have lost:
Two trowels
A pair of scissors
A pair of Felco secateurs (whimper)
Goodness knows how many pairs of cheap secateurs
Two pairs of loppers
It mostly happens this time of year or later in the summer, when I'm pruning or cutting back. I fight my way into the undergrowth armed to the teeth with secateurs, scissors, string, wire, loppers, whatever, and commence work. At some point I have to put down the secateurs, scissors, string, wire, loppers, whatever, in order to tie something in or pull something out. Then, of course, I totally forget about the thing that I've put down.
Of course, at some point I realise that I have mislaid a particular tool. I go back and have a look for it, but there is no sign of the blasted thing. My theory is: they hide.
Even more mysterious, the minute I buy a replacement, the missing tool will reappear.
I'll return with my new purchase and there it will be, in full view, lying on the grass or reclining on a chair.
The latest version of this involved my second pair of loppers. These are dark green, so admittedly difficult to see. However, they are also quite big - at least 2ft long - and have a nasty habit of making their presence felt by falling on to your foot, so they are not easy to lose.
They are the sort that have telescopic handles, which means they are totally reliable. What I mean is, you can totally rely on them to collapse the minute you have the blades nicely positioned to take off an awkwardly placed branch.
Anyway, I went to the shed yesterday - no loppers. A cursory look round the back garden proved fruitless. In any case, I couldn't remember using them in the back garden. I could remember taking out a couple of bamboo canes in the front, but no, they weren't out there either.
I felt very grumpy about having to go and buy a new pair (you can't survive for very long in my garden without a pair of loppers), so I decided to play the loppers at their own game. I pretended to go to the garden centre, but then snuck back into the garden. Sure enough, there they were, leaning nonchalantly against the fence by a newly planted honeysuckle. 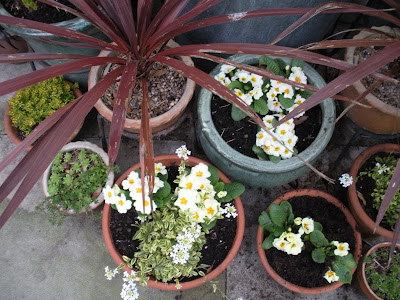 Posted by Victoria Summerley at 4:16 PM