Autumn and its consolations 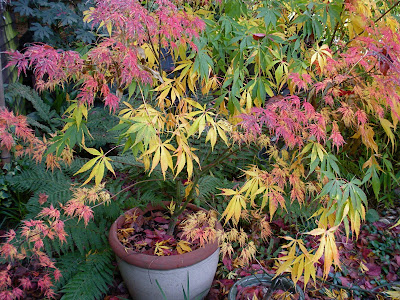 I've really enjoyed sweeping up the leaves this year. It's not a chore I look forward to with enthusiasm, but on a bright crisp morning it can be very therapeutic.
These are two of my Japanese maples - Acer palmatum var dissectum 'Seiryu' (in the pot, with the red, lacy leaves) and Acer palmatum 'Osakazuki'. You never know with acers whether they're going to colour up or not. Sometimes, if it's been a hot dry August, the leaves have shrivelled before they've had time to take on their autumn tints.
This year, both 'Seiryu' and 'Osakazuki' are performing well. 'Seiryu', despite its rather fragile appearance, seems to be a real toughie. 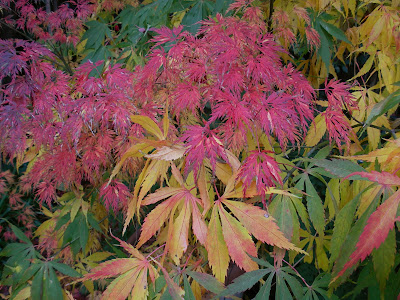 There are other things going on in the garden too. The Fatshedera lizei is in flower, which looks fabulous against its big leaves. Whoever had the idea of crossing a fatsia with an ivy, I salute you. You get the best of both plants (big glossy leaves, flower heads) but without the downsides (tendency to take over the garden). The loquat is also in flower, but unfortunately I can't reproduce the scent, which is like frangipani. 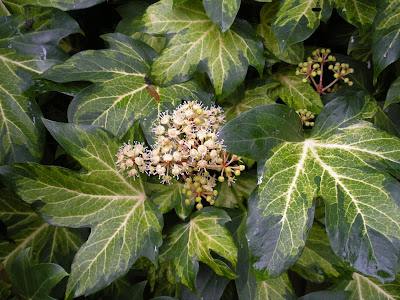 In neighbouring gardens, we've been treated to the annual Shock and Awe display that is Guy Fawkes night in the UK - sometimes called Bonfire Night. I love the fact that this coincides almost exactly with the time of year when one wants to be burning leaves.
How thoughtful of Guy Fawkes and his fellow conspirators to time the Gunpowder Plot - in which they planned to blow up the palace of Westminster, the House of Lords and King James I - at the beginning of November.
I haven't had time to buy fireworks, and bonfires are frowned upon (unless they're part of a public display). But with leaf colour like this, who needs flames? 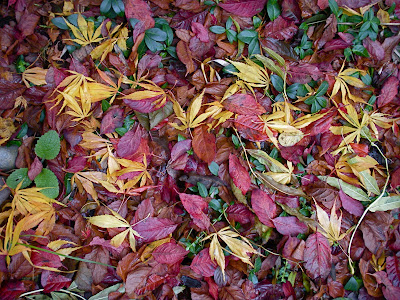 Talking of Bonfire Night and the Gunpowder Plot, you may be interested in a story I covered for today's Independent, about the Tudor mansion of Lyveden New Bield in Northamptonshire, and its lost garden.
Hope you enjoy it.
Posted by Victoria Summerley at 1:16 PM