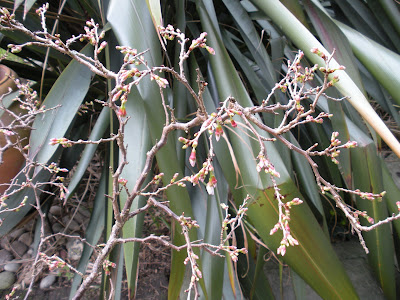 Once upon a time, PlantMadNige (aka gardening writer Nigel Colborn) wrote a piece for one of the UK gardening magazines about a dear little shrub called Prunus incisa 'Kojo-no-Mai'. Prunus incisa is better known as the Fuji cherry, and 'Kojo-no-Mai' is a small cultivar that grows to a maximum of about eight feet (2 metres), although I have never seen one that big. I think the name means 'Butterfly Dance', but do correct me if that's wrong.
I can't remember when the article appeared, but it must have been at least eight or nine years ago, because I was still living in my last house at the time. I immediately rushed out and bought one, seduced by his description of a lovely little thing with early pinky-white flowers and enchanting ziggy-zaggy stems. The stems are often defined in nursery catalogues as twisted or contorted, but ziggy-zaggy is a much more accurate description.
Mine is in a pot, and has been ever since I bought it. I loved it so much I now have another one, also in a pot. I've bought them for my mother and my sister and I nearly bought yet another for myself when I saw standard-ised versions at RHS Wisley the other day. Luckily, common sense (and the price: £35) deterred me.
They do well in pots and they look good too - like a large bonsai. I usually top mine up with manure or plant food each spring. They're not unattractive plants when the flowers are gone but they're not particularly showy either and because they're quite compact and slow-growing, they can look a bit lost unless they're in a rock garden or a Japanese-style garden. They make me think of a small girl singing a solo in the school show, who then stands demurely with eyes downcast and hands folded while the rest of her classmates perform.
Putting them in a pot means you can move them into a prominent position when they're flowering and return them to a non-prominent position when the flowers are over, which is usually at least six weeks later. They usually start flowering around the second week of March, no matter what sort of winter it has been. Mine are just about on schedule. I'll post a picture when they bloom, but I thought you might to like to admire their 'bone structure'.
One thing puzzles me, though. My plants look identical, yet one has noticeably pinker flowers than the other. Any ideas, Mr Colborn? 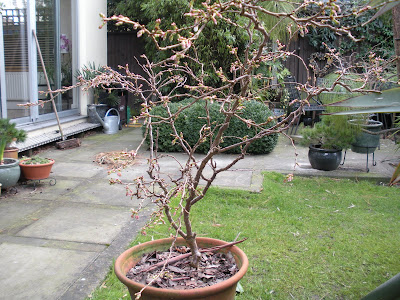 Posted by Victoria Summerley at 11:14 PM