The Group (with apologies to Mary McCarthy) 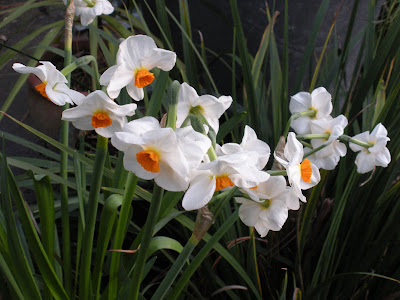 A few weeks ago - months probably - I wrote that I'd been invited to join a local gardening group. Last week, I finally managed to make it to a meeting. I have to admit this was partly because it was held next door, at my neighbour Ruth's house, and she would have thought me too pathetic for words if I hadn't managed to stagger the ten steps it took to get there.
Ruth has a gorgeous garden which in springtime is full of blossom, so it was great to wander round as the sun set, glass of wine in hand, and admire her camellias. And it was just as much a thrill to meet people who until that moment had just been names on an email.
The aim of the evening was to have a plant and seed swap, which worked very well, although I think if the Metropolitan Police had happened to burst into the house at any point, they might well have misinterpreted the activities. All sorts of intriguing substances were produced in rather dodgy-looking small plastic bags and pharmaceutical bottles.
Seeds on offer included Borlotti beanx, climbing french beans, radishes, chillis, and lettuce. Then there was a white nigella, Lathyrus vernus rosea (a sort of shrubby pea with pink flowers), muscari (a light blue and a dark blue variety), and purple morning glory (used by the Aztecs - though not by us, HM Constabulary might like to note - as a hallucinogenic). Plants included nerines, hostas, Libertia grandiflora, a very strongly scented mint and Lychnis coronaria.
As my contribution to the group, I volunteered to set up a blog, which would serve as a kind of diary cum database throughout the year. You can read it here.
By the way, talking of Mary McCarthy, has anyone read The Group? When I was a teenager, it was one of the must-reads along with The Women's Room by Marilyn French (shows you what sort of vintage I am, doesn't it?) I lost my copy ages ago, but I see it's virtually impossible to buy now, unless you want to pay £20 for a secondhand paperback.
The picture at the top is of Narcissus 'Geranium' growing in a pot in my garden. It's a tazetta type (multi-headed) with the typically strong smell and 100 per cent reliable.
Posted by Victoria Summerley at 6:31 PM