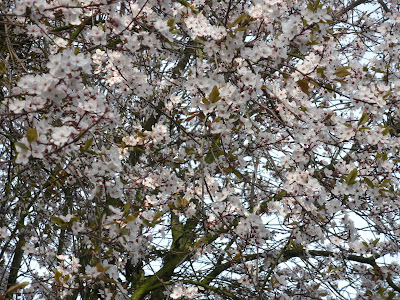 Loveliest of trees, the cherry now
Is hung with bloom along the bough,
And stands about the woodland ride
Wearing white for Eastertide.
A E Housman 1859-1936

Yes, yes, I know, everyone knows this poem. It's the poetic equivalent of Vivaldi's Four Seasons, or Handel's Water Music - it's so well-known, it's almost become a cliche. But you have to be very strong-minded indeed not to find the words stealing into your brain at this time of year.
Housman, of course, meant the wild cherry, Prunus avium, which he saw growing along the hedgerows and woodland edges in his beloved Shropshire, not the ornamental cherries you find in suburbia. However, we metropolitan types don't have much opportunity to wander the byways of rural England, more's the pity, so we have to take our pleasures where we can.
The picture above shows the big cherry tree at the end of my garden. It's Prunus cerasifera 'Pissardii', or purple-leaved plum, which lots of people loathe. I rather like it. In any case, we never call it a purple-leaved plum, or cherry plum. When an Iranian friend came to visit for the first time, she exclaimed: "Oh, you have an Iranian cherry tree!" It's been known in our household as the "Iranian cherry" ever since. It sounds so much more exotic.
However, my friend was absolutely right. Prunus cerasifera is native to Asia Minor, and Monsieur Pissard, who gave his name to my tree, worked as a gardener to the Shah of Iran. He brought it back to his native France sometime around 1880. By the time my house was built in the 1930s - just around the time when Housman died - ornamental cherries had become very fashionable, and my "Iranian cherry" would have been a must-have. It's probably one of the oldest trees in the neighbourhood.
Trying to predict when it will come into flower is almost impossible. Some years it flowers in February, others as late as April. This year, it's in full flower right now, so I hope that augurs well for the summer.
It's funny how much it changes the look of the garden. Instead of a big dark, brooding presence at the end, there's a massy of frilly, frivolous blossom. And instead of big jungly leaves everywhere, suddenly there are lots of little flowers. 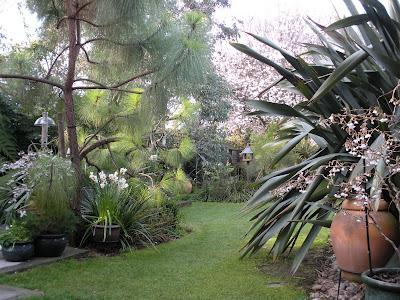 A view of the whole garden. See how the cherry tree at the end practically disappears? 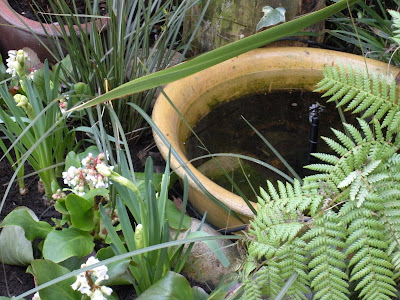 There are other things apart from cherries blooming in the garden too, like these Bergenia 'Bressingham White' 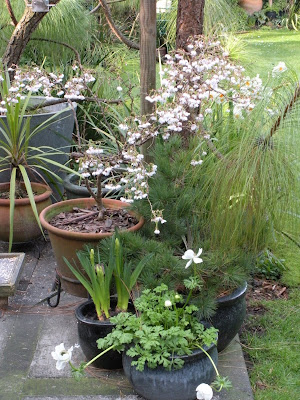 Above and below, Prunus incisa 'Kojo-no-mai' finally coming into flower. In front of them is a white variety of Anemone coronaria that I found in my local garden centre and brought home to cheer myself up. Coincidentally, these can be found in the Middle East too - particularly in Israel. 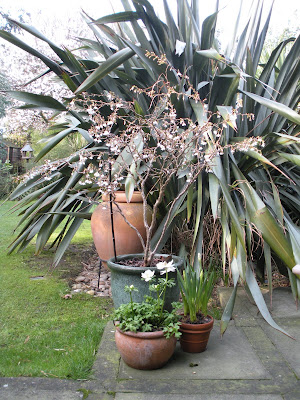 Posted by Victoria Summerley at 9:39 AM