The last rays of sunshine 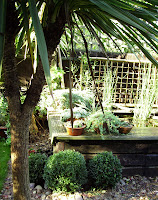 This is how it goes. You decide to take advantage of the gorgeous October sunshine and photograph the garden. You go to the secret shelf where you keep the camera, but it is gone. Then you remember that you reluctantly allowed someone to borrow it to take pictures for an art project on the strict understanding that they give it back immediately. Astonishingly, they have not remembered to return it.
You finally locate the camera beneath a pile of homework, unwashed sports kit and various other bits of rubbish that eddy around your daughter's bedroom like the flotsam in a fishing port. (When I was young, I imagined myself living somewhere that was a cross between Little House in the Big Woods and Little Grey Rabbit when I grew up, with fresh gingham curtains at the windows and a bowl of cowslips on the table. My daughter's bedroom is more like Little Grey T-shirts on the Bedroom Floor).
Triumphantly, you take the camera into the garden. You put it down, because you've noticed that something needs fixing or deadheading or tying in. You fix, or deadhead, or tie in. You then can't remember where you left the camera.
Half an hour later, you locate the camera (and the secateurs you left outside two days ago). You switch it on, and receive the abrupt message: "Battery depleted". You go to the battery charger and find, astonishingly, that there are no batteries in it. You sigh heavily, and put the depleted batteries from the camera in the charger.
Several hours later, you remember to return to the charger, put the batteries in the camera and go outside. It is now dusk. Tomorrow you will begin the process all over again.
This is what I eventually managed to photograph: 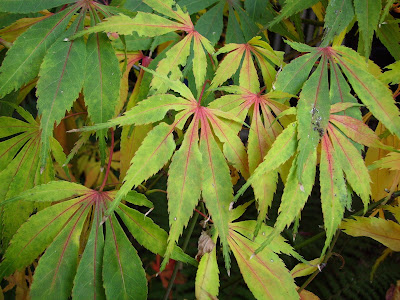 Acer leaves changing colour. This is Acer palmatum ‘Osakazuki’. It has been known to go bright red in autumn, although in dry years, it sheds its leaves before it has had time to change colour. This year it's decided to go for a kind of two-tone effect. 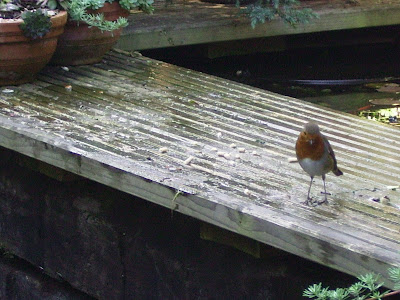 A friendly robin. It looks a bit like one of those fake ones, that get slightly knock-kneed from having their wire legs wrapped round a branch of the Christmas tree. But it is real, I promise 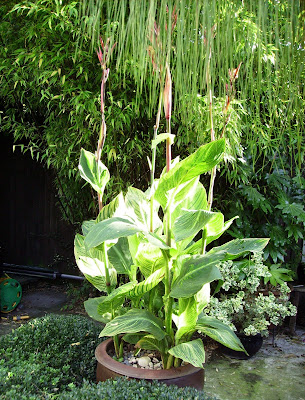 Cannas, still looking good from a foliage point of view, though the flowers are flagging a bit as it gets colder. I grow all my cannas in pots, and feed them like mad. Use anything you like - a generous forkful of manure as a top dressing in late spring, when the soil warms up, a handful of Growmore, seaweed extract, all of the above: whatever. Just keep feeding them 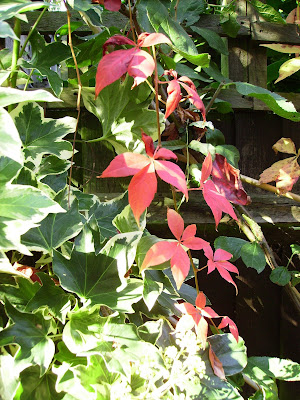 Virginia creeper growing down over a variegated Fatshedera lizei. Virginia creeper can be a pain but it's difficult not to forgive it all its bad habits at this time of year. You feel you could almost warm your hands at it
Posted by Victoria Summerley at 10:43 PM