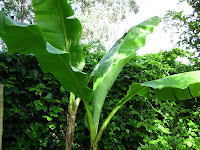 We were set to have the first cold snap of winter in London this week, with temperatures going down to -2C (28F) overnight. That may not seem much if you live in Nebraska or Norway, but for London in October, that's quite cold.
Anyway, just as I was cursing the weather for catching me (and my bananas) out, the Met Office seems to have revised its forecast and while it's still going to be pretty chilly, I don't think we're going to have any big overnight freezes after all, thank goodness. Not this week, anyway.
In previous years, I've used "banana houses" to protect my Musa basjoo, or hardy bananas. These were made of 2" x 2" timber, about 15" square, and about 6ft high. (My husband did the tricky bit - like making them.) I cut the bananas down to about six feet (you chop all the leaves off, then saw the stem to the height you want it, using either a pruning saw or, in my case, a bread knife). I then wrap them up in yards of horticultural fleece, put the frame round them and staple split bamboo screening roll to the frames, to make them look more attractive. The fleece does a good job on its own, but it doesn't look very nice: in fact, it looks rather weird and ghostly on a winter evening, and not in a good way.
At the Royal Horticultural Society's garden at Wisley, they use straw, stacked incredibly neatly within chicken-wire frames, and topped off with pretty little minarets and domes made of polythene. The idea is to keep bananas frost-free but to let the plant breathe (so it's not really a good idea to use bubblewrap), and to provide some sort of "lid" to stop rain going down inside the plant and freezing, hence the polythene minarets.
I'd ideally like to use straw because it looks so much more attractive, but finding enough straw to do the job in the centre of London is a bit of a problem. I'd probably need a couple of bales. I'd really love to know how to make the polythene minarets too. If anyone from RHS Wisley reads this and fancies giving a masterclass, please do get in touch.
However, having gone to all the trouble of making frames and so on, I felt a bit silly this spring when, after yet another mild winter, I had to unwrap the bananas in early March because they were putting on so much growth. A couple of London gardening friends who also grow sub-tropical plants told me they never bothered to protect their bananas. So long as they were in the ground, they said, they seemed to survive quite well. So this year I decided to dispense with the frames, and the fleece, and just leave the Musas to get on with it.
It's easy to become blase about tender plants in London. There's almost an element of machismo about it: good grief, you say to people, I never protect my pelargoniums/cannas/hardy ginger/oleander/echeveria/tree ferns, or put them under cover. Besides, I don't have room for a greenhouse, and I don't have a conservatory and a surprising number of things will brush through the odd frosty night.
This rather swaggering, show-offy approach evaporates pretty quickly at the first sign of a real, sustained hard frost, however, and one can be found scurrying around the nearest garden centre buying up bubblewrap and fleece.
I suspect we're about to have the coldest winter for years. I suspect I'm about to have a real, sustained, hard panic. 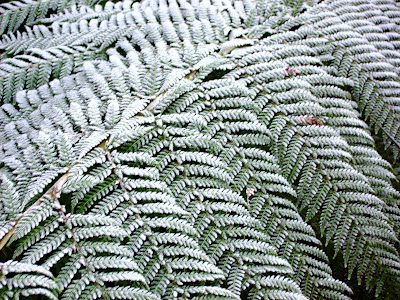 Dicksonia antarctica during a rare frost last winter. Ironically, though this looks dramatic, it didn't even go brown. It's quite a big one (the fronds are about 6ft long), and it's been in the ground about five years
Posted by Victoria Summerley at 7:28 AM