An audience with Stephanie Cole

Some of you may recognise the visitor I had today. It's the actress Stephanie Cole who's staying with my next-door neighbour Ruth while she's appearing as Maud in Born in the Gardens, by Peter Nichols, at the Rose Theatre in Kingston. (It's had good reviews, so everyone's hoping it will transfer into the West End.)
Stephanie is a loyal Independent reader (hurray!) so she'd read about the garden in my column and asked if she could come and take a look at the real thing. Wow! I told Ruth I'd consider it an honour.
I first saw Stephanie in the BBC drama series Tenko, about a group of women interned in a Japanese prisoner-of-war camp after the fall of Singapore, so I thought she'd feel quite at home in my garden. Unfortunately (or perhaps that should be fortunately), there are no Japanese guards, or Bert Kwouk jumping out of the bushes to bark orders, but it has a certain sort of tropical atmosphere.
Stephanie herself, however, is quite unlike the grumpy Dr Beatrice Mason character she played in Tenko. She's quite unlike most of the parts I've seen her play, in fact. She's charming and funny and the sort of person who just seems very interested in everything. Upon hearing that my daughter played alto sax (among other things), she said she'd always wanted to play alto sax, inspired by Johnny Hodges, who used to play with Duke Ellington. She was a great friend of my late and much missed colleague Miles Kington, and she told me he had also helped inspire a love of jazz. In fact, she's doing an evening of readings at the Bath Festival on Wednesday 22 October from How Shall I Tell The Dog?, the very funny book he wrote about the cancer that finally killed him in January this year.
I've always admired Stephanie as an actress, not least because she seems to handle serious parts and comedy roles - such as Diana in the wonderfully anarchic Waiting for God - with equal ease. There's something very real about her performances.
Anyway, she admired my bananas and tree ferns and told me about her garden in Somerset, and Ruth and I bewailed the existence of blanketweed in our ponds, and we had a very nice time. I told her Craig was very disappointed he couldn't be there (he's still in hospital), and she said that if the show transferred, we should come and see it and go out with her for dinner afterwards and pretend we were all very grand. What a lovely idea. 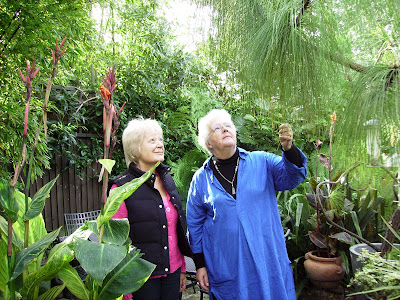 Stephanie (right) and Ruth in the garden. The great thing about taking pictures of actresses is that they know how to strike a natural-looking pose
Posted by Victoria Summerley at 1:22 PM