The virtues of autumn 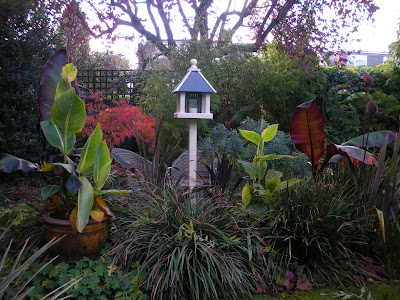 I've just been reading Veg Plotting's post about her GMT tidy-up. The clocks go back in the UK tonight, from British Summer Time (BST) to Greenwich Mean Time (GMT), and VP says she uses this as a moment to remind herself to do an autumn clear-up and square everything away for winter. I think it's a really good idea.
I was pottering about in the garden today too, impelled not so much by the time change as the fact that for once - for the first time for weeks - I didn't have to do anything tedious like go to the tip, or tidy out the garage, or stack books.
There's something very calming about autumn chores. Sunshine is a bonus, rather than an expectation, and the earlier dusk drives you indoors for a cup of tea before you get over-exhausted. It doesn't matter if you accidentally stand on something or chop something back by mistake, because unless you're very unlucky, it's about to go over anyway.
And autumn chores are cheaper! In spring, there seem to be endless temptations to splurge - buying new plants and new pots to replace those damaged by frost; buying new plants and pots because, ahm, I can't resist them and so on.
Tidying, on the other hand, doesn't cost anything, and there isn't the same sense of urgency as there is in spring, when everything is growing at 100 miles an hour. I felt very virtuous as I swept leaves, cut back dying annuals and subsiding perennials, and put unused pots away in the garage for winter.
Posted by Victoria Summerley at 4:58 PM