So where was I? Oh yes, I was about to have the study redecorated. Well, today I can report that for the first time in three weeks, I can sit down at my own computer, at my own desk, on my own chair. Oh, the luxury!
I find that any sort of home makeover project is a bit like childbirth. You embark on it with great excitement and enthusiasm, only to discover that most of the process is quite tedious and involves a variety of problems, false alarms and delays. When it's finished, however, you're thrilled with the results - and after about a year, you've forgotten all the discomfort and inconvenience and you're thinking about the next one.
While the study was being redecorated, I also went through a Fridge Trauma. I won't bore you with it: I started writing down the saga and nearly sent myself to sleep. So I'll just say that my fridge was out of action for four weeks. It's OK now (more or less) but I never imagined that being without a fridge could prove so stressful.
While all this was going on, of course, the garden was rather neglected. We've been having a spell of very good weather here in the UK, which is lovely but also a bit worrying. We need rain at this time of year if plants like camellias are going to give a good display in the spring, because late summer and autumn is when they are forming their buds. 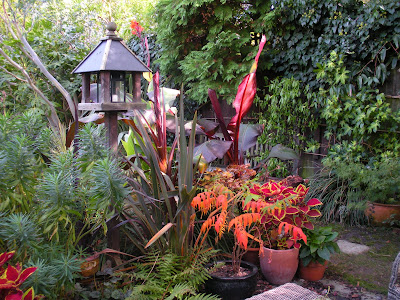 Love the autumn colour of this sumach, which was a passalong from my friends Peter and Delphine. The coleus beside it is Trusty Rusty. 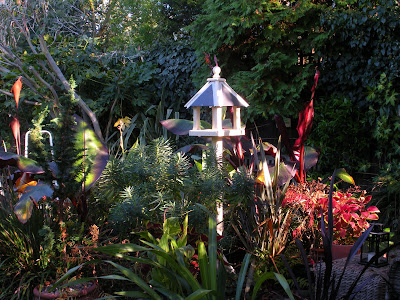 Seeing the decorators at work inspired me to paint the bird table. In the end, I went for a safe, boring cream, but I think it looks good. I also painted some trellis to go across the front of the house, but that's another post. I did so much painting, in fact, that my daughter remarked drily that she was surprised that the cats were still their original colour.
Talking of the cats, here they are. 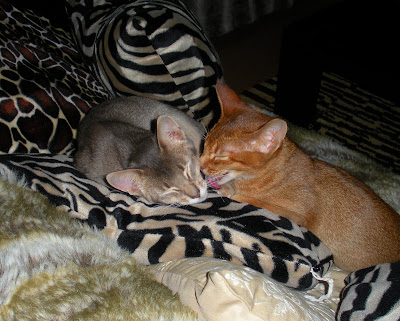 As you can see, they get on quite well. Luigi, on the left, is the criminal mastermind, and Mario is his willing accomplice. They are very good at stealing food and I have had to buy a pedal bin instead of a touch-top bin, as Luigi worked out that if you jumped on the bin, and then onto the work surface, it opened. Mario could then jump into the bin and retrieve whatever took his fancy. They are thieves and scoundrels - but very cute and cuddly. 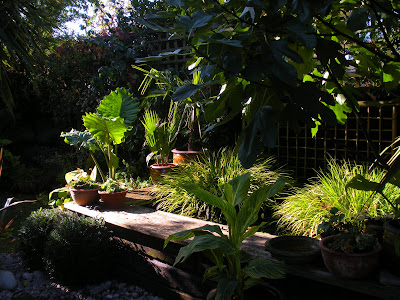 One of the great pleasures of autumn is the low light, which illuminates foliage like a spotlight. The alocasia on the left is A. portadora. 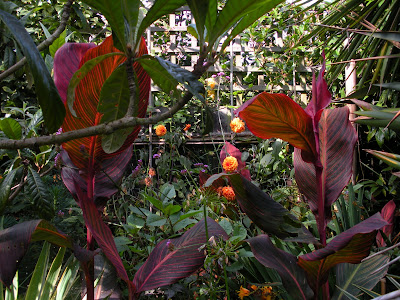 There's a lesson here for anyone who wants to grow dahlias (centre) in close proximity to yuccas (bottom left). Don't. You won't be able to get in to deadhead the dahlias without donning a suit of armour.

Posted by Victoria Summerley at 8:59 AM