It never snows in London in November ...

... and I never thought I'd have a snowball in hell's chance of winning a Garden Media Guild award.
Yet here I am, with three inches of snow in Wandsworth, and a framed certificate on the wall that tells me I am the Garden Media Guild Journalist of the Year 2010. Unbelievable.
The Garden Media Guild describes its awards as the "Oscars" of the UK garden media world. Their annual lunch is a very glitzy affair, in gardening terms, where all the starry writers and broadcasters get together with the rest of the industry at The Brewery, which itself is an award-winning venue in the City.
I'd been invited by lovely Martyn Cox to sit at his table, which was described by James Alexander-Sinclair as the "Billy No-Mates" table. In other words, none of us had managed to schmooze an invitation from one of the big horticultural trade companies, which meant we had to pay for our own tickets.
Well, all I can say is that it was a small (well, perhaps not that small) price to pay for a very entertaining lunch. On the table were Laetitia Maklouf, Michelle Wheeler, Dawn Isaac, Mark Diacono, Michelle Chapman, garden writer and editor Tiffany Daneff, writer Alex Mitchell, Amateur Gardening news editor Marc Rosenberg, and garden photographer Rachel Warne.
There was a lot of giggling, a lot of gossiping, and a lot of cheering and whooping once the awards started.
We may have been "Billy No-Mates" but we were certainly not "Billy No-Awards". No fewer than four of us won awards - Marc (News Story of the Year), Mark (Columnist of the Year), Dawn (New Talent) and myself. Naturally, there were huge cheers for other friends who won, who included Lia Leendertz for her blog, Midnight Brambling, Anne Wareham, for her website Thinkingardens and Matthew Wilson for his TV series, Landscape Man.
So, a great day. In fact, so great a day that I sort of seized up with shock and while everyone else waltzed off to the pub, I went home and had a cup of tea.
I know that sounds pathetic, but here's the thing: I write about gardening because it's a passion and I want to share that passion with everyone else. As a mainstream news journalist who works full-time for a national newspaper, I'm in a very good position to get my stories into the main body of the paper rather than be restricted to a section or a weekly supplement.
I'm very grateful to The Independent for giving me the space to explore stories or issues I think are interesting not only to the gardening community but to the public at large. The idea that I might get an award for doing that is ... well, it's unbelievable.
Thank you very much to the Garden Media Guild and to everyone else who made yesterday so much fun. 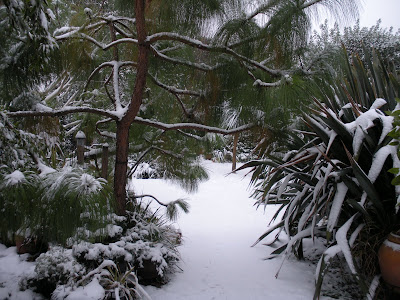 Posted by Victoria Summerley at 10:49 AM