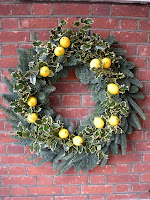 Esther has shut down for the festive season. Arabella is doing the most wonderful Advent calendar. VP is busy looking for another Messiah to sing. Helen and Karen have been testing trees and lights. So where are you up to with your Christmas preparations? Let me rephrase that: what have you failed to do so far?

I have not:
Sent cards
Put up the tree
Checked out the Christmas tree lights
Swept the front step (as you can see from the picture below) and put down a fresh mat, which I like to do at Christmas time. Indeed, Christmas and New Year is usually a time of great upheaval and reorganisation in our household. I suppose it's because I have to clear away all the normal clutter in order to display the Christmas clutter. In the course of this, one discovers cobwebby corners and grubby paintwork, which one wishes one had time to clean, but which one usually disguises with strategically positioned furniture.

On the other hand, I have:
Ordered the turkey
Received my first Christmas card, from a friend in Australia
Booked tickets for my daughter's carol concert (but haven't received them, since daughter, who has the attention span of a gnat, is in charge of bringing them home)
Bought the new mat, ready to put down when I get round to sweeping the step (which I am planning to have retiled in the spring)
Made a wreath for the porch
Er, that's it.

Don't be too impressed by the wreath - I cheated. I bought the components at New Covent Garden flower market at dawn last Saturday. I wanted a really big wreath because I always put mine on the bare bit of wall by the door instead of on the door itself, and a small wreath looks a bit forlorn there.
I knew the only place I would get a base big enough (without paying huge amounts of money for it) would be the flower market, and sure enough, they didn't let me down. The actual base is 20 inches, and when you include the foliage it measures about a yard from top to bottom.
I have a lot of variegated or yellow-leaved plants in the front garden, so I also bought some variegated holly to pick up those colours. It seemed like a good idea at the time, because I imagined I would wear gloves, but of course, if you're doing something fiddly, you keep taking your gloves off. My fingers now resemble a pincushion.
The flower market also sells every single thing you can think of to decorate wreaths. Cinnamon sticks, dried orange slices, fresh miniature apples in green, red or yellow (how do they do that?) bows, ribbons, you name it. I decided I wanted something yellow, and was very taken with the mini apples. However, this is the first time I have ever attempted a wreath (even in a cheating sort of way) so I wasn't very sure how I was going to wire them on.
In the end, I saw some fake lemons, which came complete with a long wire on the end. Perfect! They must have been made especially for a wreath cheater.
Like me, you probably have your own family Christmas traditions. Some of ours are rather eccentric - we like to watch the Morecambe and Wise sketch in which they make breakfast to the music of The Stripper. And we like to watch Some Like It Hot. The reasons for this are lost in the mists of time.
I think I will add wreath-cheating to my list of Christmas traditions, however. There was something very nice about wandering around the flower market and smelling that wonderful Christmas-tree smell, then loading the car with greenery as the sun came up.
There are things we squabble over too. The children like to put the tree up the minute December strikes, while I prefer to put it up a bit later. If I had my way, it would go up on Christmas Eve, because I like the idea of Advent being a quiet time of waiting and anticipation. Usually we compromise (in other words, I crack under pressure) around the first weekend of December, but this year we've managed to get to the 8th without the tree going up. I'm hoping to get as far as next weekend. 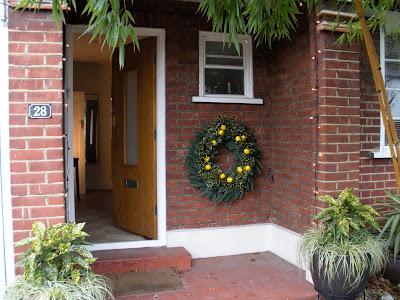 The Unswept Step. Actually, it doesn't look too bad here, given that I hate it anyway. It's tiled with old-fashioned terracotta quarry tiles, which would be OK, if some idiot hadn't decided to paint them terracotta colour at some point, and the paint has never quite completely come off. They never look really clean, and they don't seem to respond to being polished.
So I'm going to replace them in the spring, when the weather warms up a bit, with black and white quarries. I can't wait.

Posted by Victoria Summerley at 1:29 PM