Muttering in the shrubbery with Rob

Today I went to visit Rob, who writes a gardening blog called Mutterings in the Shrubbery. Rob lives quite near me - about 15 minutes drive from my house - in the neighbouring borough of Merton. I'd been looking forward to seeing his garden for ages.
It was horrible weather this morning. It started off cold and damp, and had progressed to that sort of steady rain that soaks you right through by the time I got round to Rob's. I knew, from reading his blog, that he was a fan of exotic plants, and I'd seen pictures of his garden, but even so I was unprepared for how fascinating it would be.
Poor Rob: I had an anorak with a hood, but he didn't even have a coat on. However, he patiently guided me round, plant by plant, telling me how he grew this from seed and that from a cutting and even, in one case, brought a tiny plant home from Australia in a poster tube.
His garden has a similar aspect to mine - west-facing - but gets much more light. On the cooler, north-facing side there are more tree ferns than you can shake a stick at (not just dicksonia, but cyathea as well), schefflera, loads of palms, nandina, and heuchera. On the other hotter side, there are succulents - agaves, echeverias, aloes, as well as a tree festooned with air plants (tillandsias), which are stapled to the trunk or even just hanging in a basket.
So many things caught my eye - the albizias (a green one AND a purple one), the colocasia, the tree fern trunks used as edging (no, really; apparently a shipment was accidentally sprayed with something and Rob got the trunks for nothing). Not to mention the Yucca rostrata (I hope that's right, Rob) and the Tetrapanax rex, and the pond, and the wonderful curly-leaved echeveria in the picture below. Apparently, it came from a nursery near to one I go in deepest suburban south London. Guess where I'm going tomorrow!
I've seen whole garden centres with less of interest in them than one square metre of Rob's garden. Even better, after our tour, there was a cream tea, with scones, clotted cream and jam. I can't think of a better way to spend a morning, even if it was bucketing down. Finally, to send me on my way, I was given a heuchera with dark foliage and astonishingly long sprays of creamy white flowers. Thank you so much, Rob - I hope you managed to dry off eventually. 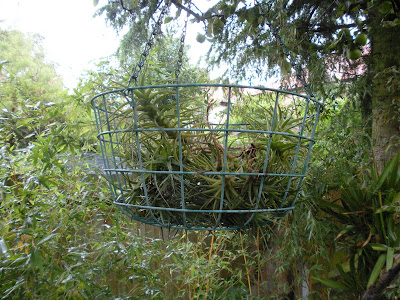 Tillandsias growing happily in a hanging basket. Rob's promised me one when he comes round to see my garden. 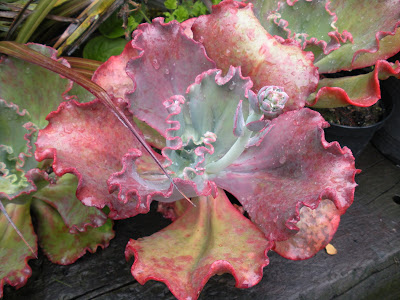 The wonderful curly-leaved echeveria. I won't even dare guess the variety. 'Blue Curls'? 'Mauna Loa'? Who cares, it's lovely. 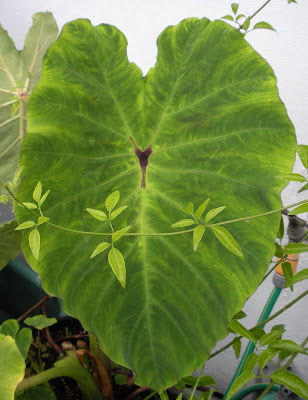 Rob's colocasia, which has huge marbled leaves and a distinctive dark Y-shaped blotch. Below, a group consisting of schefflera (right), tree fern (left) and purple acer. Was it just the rain getting to me or do they look like a collection of umbrellas? 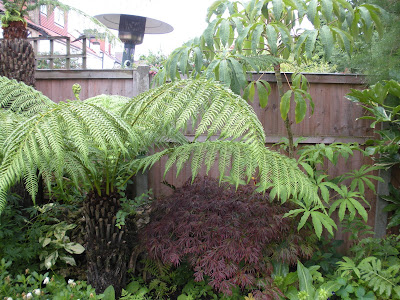 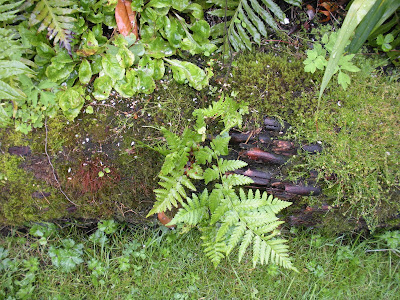 Above, the tree fern trunks that Rob uses as edging for the borders. They also act as hosts for moss and seedlings, such as this fern and even an acacia. Below, just look at the colours of that carnation. 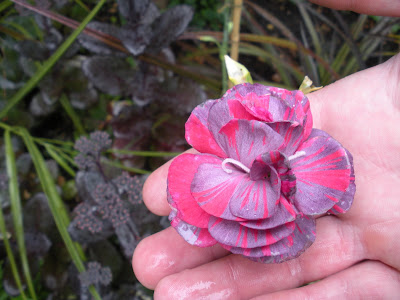 Posted by Victoria Summerley at 7:19 PM