Doing the hokey-cokey at Hampton Court 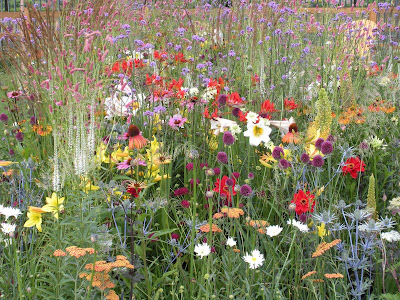 The Sadolin Nature to Nurture Garden, designed by Philippa Pearson. I thought this cottage-garden planting was superb
It was preview day at the Hampton Court Flower Show today, which was the signal for the heatwave to evaporate and the stormclouds to gather over the Thames. While this adjustment was taking place, it was alternately rainy and sunny, so those of us who had been prudent enough to take coats found ourselves doing a kind of hokey-cokey. You put your raincoat on, you take your raincoat off, you put your raincoat on and you shake off all the drops. Etcetera.
I don't know whether it was my imagination but there seemed to be less on show and fewer people around. However, the essence of Hampton Court - that wonderful mix of interesting plants, cutting-edge gardens and endless shopping opportunities - remained undiminished. And while I didn't bump into that many people I knew, I enjoyed the sight of lots of primary school children walking two by two and taking part in activities that ranged from gardening to creating Tudor scarecrows.
Hampton Court is a big showground and sprawls across 33 acres. There's plenty of room to spread out, but it also takes its toll on your feet. I find it quite easy to spend four hours there and yet come away feeling I might have missed a bit.
Oh, and please don't be jealous because I was there on press day. Once the exhibitors have finished setting up, they all disappear, so there's no one to buy anything from. This was particularly frustrating on the Cheshire-based heuchera nursery Plantagogo stand, where I would have bought dozens of plants had there been anyone to give the money to. Perhaps it's just as well there wasn't...
Anyway, here are the things that caught my eye, in no particular order. 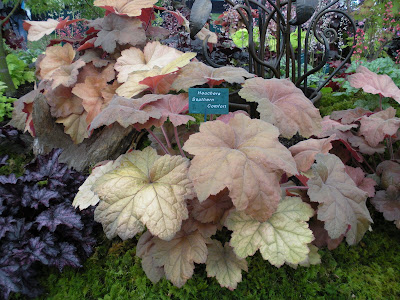 Heuchera 'Southern Comfort' on the Plantagogo stand. Look at the dark heuchera on the left, which has normal-sized foliage, to get some idea of how humungous those leaves are. They looked as if they had been sprayed gold. 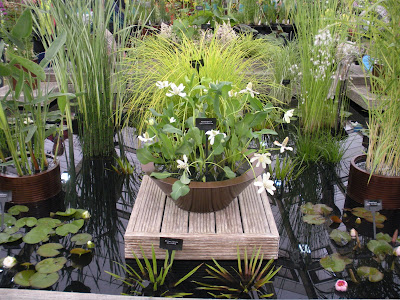 While we're still in the floral marquee, here's a beautiful exhibit from Waterside Nursery, from Sharnford, Leicestershire, who are showing at Hampton Court for the first time this year. I hope they do well - it is so lovely to see a water garden in the marquees. 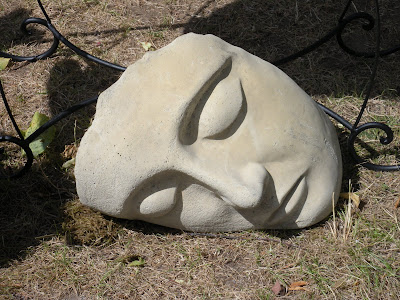 This head reminded me irresistibly of Frances at Fairegarden ... 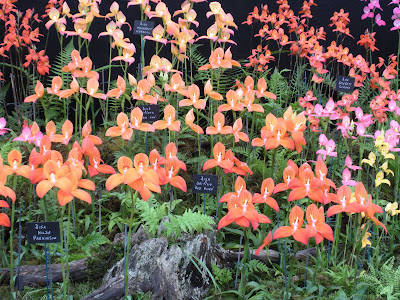 ... and these disas reminded me of Diana, at Elephants Eye, who has promised to write a post about these South African natives. 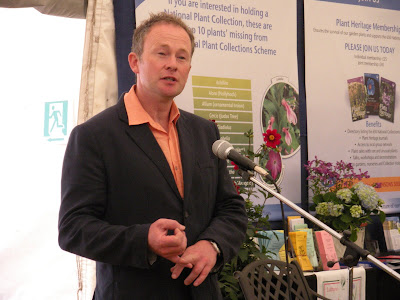 Here's Toby Buckland, presenter of Gardeners' World, giving a very elegant little speech to launch the Plant Heritage marquee. Such a shame it was interrupted in the middle by a loud public-address announcement concerning recycled cardboard. 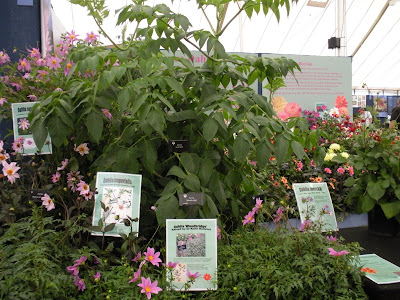 The Plant Heritage (formerly NCCPG) marquee is always full of fascinating objects. If you really want to know about a plant, this is a great place to head - the exhibits from the national collections will offer you information based on lifetimes of experience. Above is the dahlia exhibit by Winchester Growers, who are based in Cornwall. That huge thing in the middle is Dahlia imperialis, the Tree Dahlia, which can grow to 20 or 30 ft in the wild. 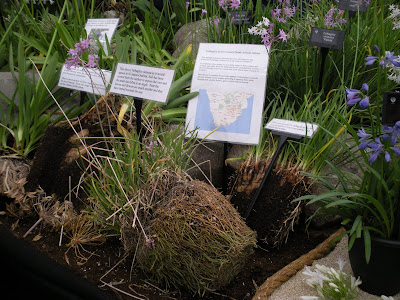 The agapanthus exhibit by national collection holder Steven Hickman focused on how these plants, and their related species, like to grow when left to their own devices. The tulbaghia in the foreground has fallen sideways, as it might in its natural habitat, and you're able to compare it with one that has grown in a pot, and had lots of attention lavished upon it. Beside it, to the left, an agapanthus has been split to show the huge rhizome, demonstrating how these plants really do not mind being congested in a pot as they naturally grow close together in limited space. 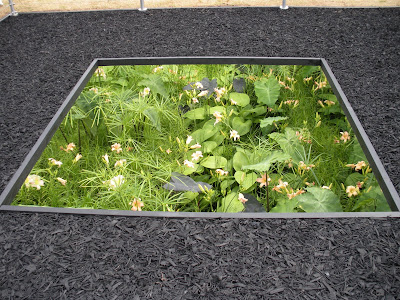 OK, let's take a quick look at the conceptual gardens. This is called 'It's Hard To See', designed by Rebecca Butterworth, Victoria Pustygina and Ludovica Ginanneschi. Apparently, it represents 'the beauty and benefit of inner-growth and self-reflection in contrast to the artificial values of consumerorientated society'. I thought it was great - it's easy to walk past it, until your eye is suddenly caught by the subterranean planting. 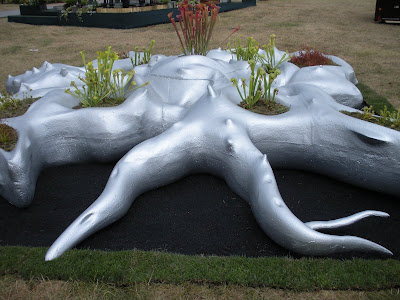 This is Monstrosa, by Fernando Gonzalez, of Metagardens. I think he's fantastic - I loved his Pulsations garden last year, though I know he'll be accused of having too much plastic and not enough plants. 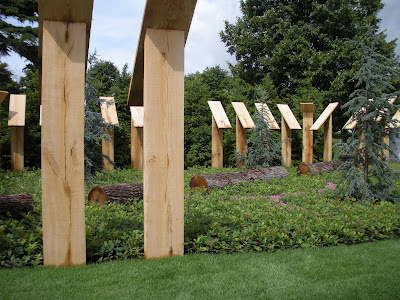 The Quilted Velvet Garden by Tony Smith. I haven't been a huge fan in the past - it's not that I hate conceptual gardens, it's just that his designs don't do a lot for me on any level, whether aesthetic, emotional or horticultural. But I did rather warm to this one, perhaps because it's more organic and less formal than his usual style. The palisade-type structures are of green oak, while what looks like bedding is actually oak seedlings, interspersed with purple heather. The logs give a kind of contradictory sense of movement and permanence, which I thought was rather clever. Though it was difficult not to snigger when you remember that this is sponsored by a brand of lavatory paper. 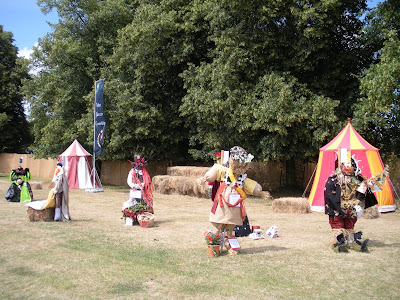 These are some of the entries in the Tudor Scarecrow competition, which were extremely well, erm, executed. This year marks the 500th anniversary of the coronation of Henry VIII and since Hampton Court was one of his favourite places, the flower show was awash with Tudor references. There was even a man dressed up as Henry VIII wandering round the show accompanied by his six wives. Of course, this is completely historically inaccurate because Henry was not a polygamist but a serial monogamist (perhaps that should be serial-killer monogamist) but what the hell. 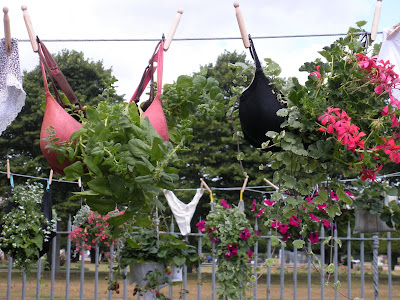 And finally, as the newscasters say, here's a silly picture of a very silly exhibit, entitled the Hanging Bra-skets. I seem to remember Martyn Cox harrumphing about this when the RHS appealed for donations of old underwear to create it. It brings a whole new meaning to the phrase 'underwear as outerwear'. I'm dying to know what Martyn thought of it. Will there be a storm in a D cup?
Posted by Victoria Summerley at 6:01 PM