It's Easter (so that means it's raining) 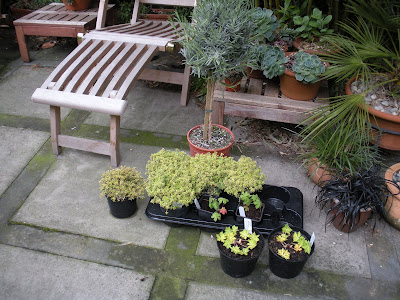 It's a typical Easter weekend here in London. It's grey and miserable, though not cold (about 12-14C or 54-57F), so there are no frost worries. In fact, it's perfect planting weather - if one could muster the enthusiasm to get out in the garden.
It's not as if I haven't got anything to do out there, so I've been trying various "eject-myself- from-house" tactics. First I read Helen Yemm's column in the Saturday Telegraph, which usually has the effect of propelling me gardenwards in the same way that some people find a strong cup of coffee helps them on their way to work. Unfortunately I was busy yesterday doing other things, so the effect wore off before I had time to get outside.
Then I looked at the herbs (see above) that I bought at New Covent Garden Market the other morning. That didn't work - it was incredibly easy to persuade myself that they'll happily sit there for another few days.
So I went to the Rare Plant Fair at Syon Park in west London today, and bought some hardy geraniums (G macrorrhizum album and 'Blue Sunrise') and a couple of 'Charity' scented pelargoniums. By complete chance, I also met Julia of We're Going To Need A Bigger Pot. I'd never met her before, but she turned around to speak to someone and I recognised her from her Facebook picture. She lives near Syon too, so I was fairly confident I was accosting the right person.
It was great to chat to her and to see what she'd bought (euphorbia, ferns, wasabi), and to pick her brains about ferns, and ask her about her Spanish field trip. We decided we needed to have a London garden bloggers meeting and talked about where this might be and who might come.
Our encounter failed to get me out in the garden, however, because as soon as I got home I jumped on the computer instead.
Anyway, now it's time for Gardeners' Question Time, so I'm going to listen  to that and hope it will inspire me. Pause here for a short intermission.
Well, I've listened to GQT and it did inspire me to go outside, specifically to move the trampoline so I can replant that area. I enlisted the help of my 6ft son, and between the two of us, we managed to get it upright. The trampoline is 10ft in diameter and the plan was to roll it under the cherry tree at the end of the garden and lean it against the back fence, out of the way. Well, of course, it wouldn't go under the cherry tree. All it seemed to want to do was to fall over on top of my son and myself, so, cursing, we put it back where it was.
I'm now on the computer again, instead of getting on with the chores. Will someone please give me a good kick up the backside? 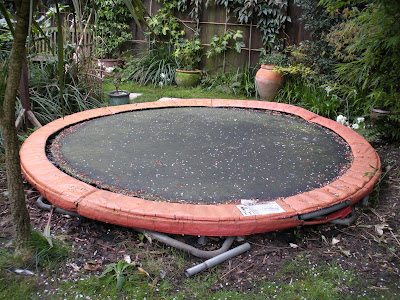 The recalcitrant trampoline, now back where it started. I swear it's laughing at me. 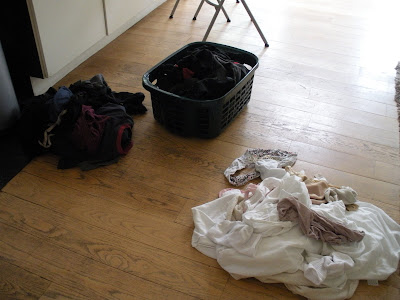 Oops, I could do with loading up the washing machine as well...
But on the plus side, there are things happening in the garden that require absolutely no intervention from me whatsoever. Just as well... 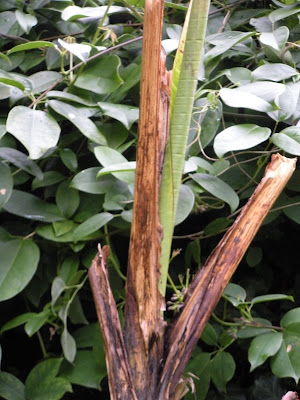 The bananas are burgeoning! They may look a little battered and bruised, but it looks like they're going to come good, despite the coldest, snowiest winter for 20 years, and despite me not wrapping them up for the first time ever. Welcome back, guys! The climber behind is Holboellia latifolia, which at this time of the year has tiny greeny-white flowers. You can just see them framed between the new banana leaf and the right-hand stalk. The flowers smell like those hot towels they give you at the end of the meal in Chinese restaurants. Holboellia (formerly Stauntonia) may sound exotic - it comes from the Himalayas - but it is a thug. Mine has covered the back fence and is constantly stretching out murderous tendrils in a bid to strangle the bananas. 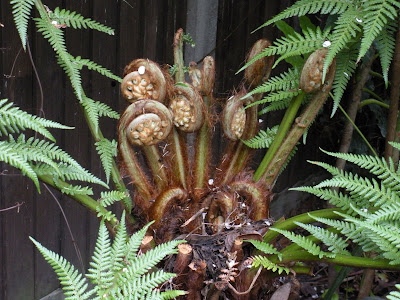 The tree fern is starting to unfold its new fronds. I love this bit. Before they start to show, you can feel them nestled inside the trunk, like little babies' heads. Then as they start to unfurl, they look like a bishop's crozier. Fabulous plants, at every stage. 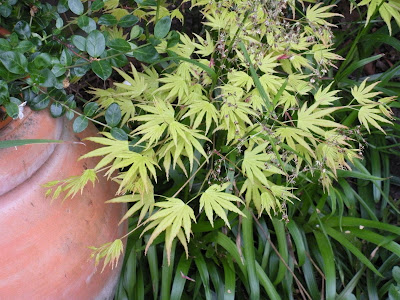 The Japanese maples are coming into leaf. This is Acer palmatum 'Orange Dream' 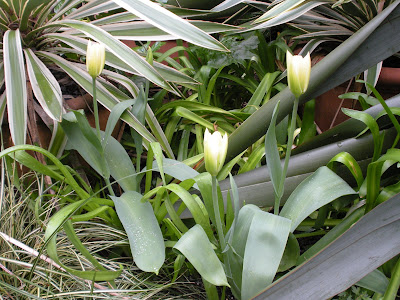 These white tulips have reappeared. How did that happen? I thought they'd disappeared for good last year. (What do you mean, lift tulips? Life is way too short.) 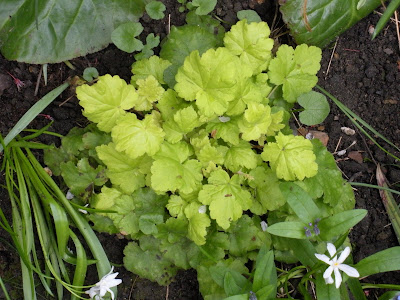 And there are some sweet little white chionodoxa next to this Heuchera Key Lime Pie. How did they get there? I don't remember planting them, but I suppose I must have done. How do you remember the difference between chionodoxa and scillas? Well, CHionodoxa are CHeeky and look up, whereas Scillas are Shy and look down. Emmat says that 'Key Lime Pie' looks like lettuce. But I love it, so there. 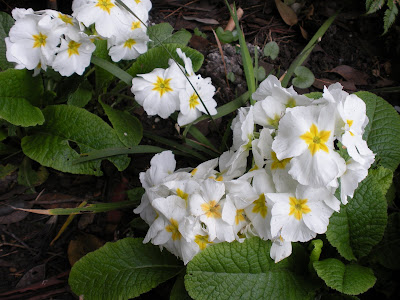 And here are some dear little polyanthus that I planted the first year we moved to this house, in 2003. They are nothing special, just bog-standard F1 types but they flower reliably every year. That's the sort of plant I like. Happy Easter, everyone.
Posted by Victoria Summerley at 1:44 PM