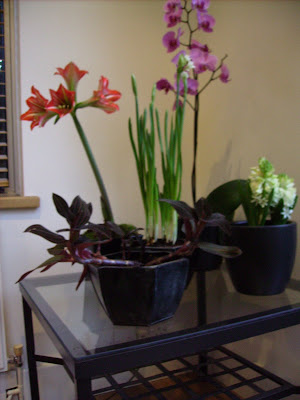 I once read an interview with a very grand British interior designer, in which she mentioned how keen she was on tablescapes. In interior design terms, apparently, this usually involves a side (ie unnecessary) table, which is then decorated with unnecessary and very expensive things.
These might be objets of one sort or another, such as an oversized string of jade beads, or a marquetry box, supplemented perhaps with some family photographs in silver frames. The table itself is dressed with at least two cloths, an overcloth and an undercloth, in very expensive fabrics, and often trimmed with tassels or fringes.
The overall effect is very English-country-house style, and it's rather nice, especially if you have an English-country-house staff to dust it all for you.
Personally, I think life is too short to do lots of dusting, but I loved the idea of a tablescape. My idea of a tablescape, however, involves plants rather than objets and the table itself is not draped in designer damask, but came flatpacked from Ikea and has a very practical glass top.
At the moment, the tablescape includes a purple phalaenopsis orchid, a red hippeastrum, some Paperwhite narcissi, some white hyacinths and a Ludisia discolor, also known as a Black Jewel Orchid. To be honest, I wouldn't normally have such brightly coloured plants, as I have a bit of a thing about white flowers (especially in the middle of winter for some reason). But most of them are presents, and so apart from being colourful, they also make me smile every time I look at them.
The Paperwhite narcissi were a Christmas present from my niece and nephew, Roisin and Dougie. When I unwrapped them on Christmas Day, the bulbs had already sprouted in the packaging, and were bent double. I planted them up anyway and forgot about them for a week, by which time they'd grown about a foot and were soldier-straight. My husband bought the ludisia for me ages ago and the purple orchid is a present from some friends of his, who knew his favourite colour was purple. 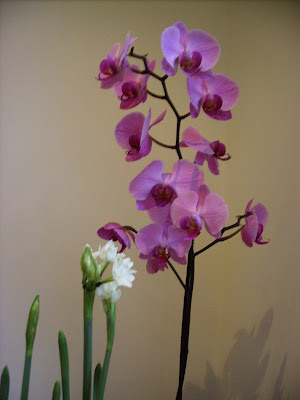 The red hippeastrum was a Christmas present from my friend Sarah, who sings in the choir with me. Apparently the name hippeastrum means Knight's Star, after the pointy club thing carried on a chain by medieval knights when they jousted. Personally, I think they look like Sarah and I, with our mouths wide open as we sing ... 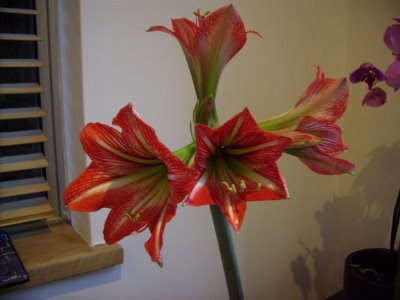 ... and the white hyacinths were a present to myself. I saw them reduced by 50% in Marks and Spencer and couldn't resist. If you go over to Veg Plotting, there is a very amusing post about the easy-peasy way to grow hyacinths. I don't think it comes much easier than just buying the bloody things. 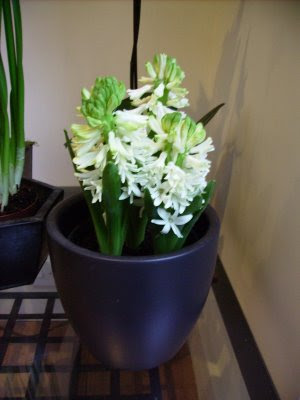 Posted by Victoria Summerley at 4:13 PM