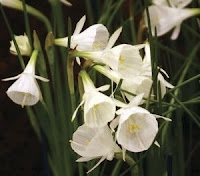 It was a lovely day yesterday, sunny and very frosty. Just the sort of weather for a morning's ramble round the Royal Horticultural Society's garden at Wisley, in Surrey. I got there fairly early so the garden was still quite quiet. It was incredibly cold. Even with gloves on, my hands were freezing and I had to walk so fast to keep warm, it was very difficult to take anything in. As for taking pictures, I was shivering so much I was worried I might drop the camera.
I was on the lookout for early snowdrops in the woodland garden, but nothing seemed to be foolhardy enough to show itself, apart from a few tentative shoots. I thought about going into the new glasshouse, which looked wonderful rising above a frosted landscape, but thought that was a bit wimpish.
So I headed instead for the alpine houses above the rock garden, where what the RHS calls 'little treasures' are on display all year round.
There's something about alpines that I find totally irresistible. Even if you don't have a rock garden or the odd pot or trough with its cargo of tiny phlox or primulas, you can't deny that they are charming, like little girls in gingham frocks. The RHS displays them well, with contrasting colours and foliage arranged to great effect and the pots plunged into sand up to the rim.
I was amused to see the resident cat, a tabby named Sunny, being chastised by one of the staff. Apparently, Sunny (who wears a plant label with his name on: we weren't formally introduced or anything) regards the sand as his or her personal lavatory. The member of staff bustled off to find something with which to clean up, while Sunny, totally unmoved by her diatribe, nibbled on a few leaves in a rather meditative way.
At this time of year the stars of the show are the hoop-petticoat daffodils, such as Narcissus cantabricus (above left) or N. bulbocodium. Anne Scott-James, one of my favourite gardening writers, is a great fan, and suggests growing them in a circle beneath an apple or plum tree, which sounds delightful. However, I've never tried growing them, because I think they suit a gentler, more rustic environment than my jungle.
So it is a huge treat to see them in the alpine house at Wisley, where one can admire them at close quarters. They're only about 3 to 5 inches high - dear little things, which look just like upturned versions of the calico petticoats Victorian ladies used to wear over their crinolines.
I think from now on they will be the first messengers of spring as far as I'm concerned. You can keep your snowdrops. Besides, it's a great deal warmer in the alpine house.
Posted by Victoria Summerley at 12:52 AM