Thursday 12 July was a day for chilling out - literally. It began with a trip to the Postojna Caves, an amazing warren of chambers adorned with stalagmites and stalactites of all shapes, sizes and colours.
Our tour guide, Sara, had warned us that the temperature below ground would be really cold, around 8C, compared to 28C outside.
I've been to limestone caves before, and was inclined to be of the opinion that when you've seen one lot of stalatites, you've seen them all. However, Postojna was very impressive, not least because you were taken into the caves on a little train, which rattled you through tunnels and under overhanging rocks at top speed.
The cave system was enormous - chamber after chamber of different formations. Some looked like tattered flags or pieces of cloth (or prosciutto, said one of the permanently hungry Year 7 boys). Others looked like melted candles, and on some of the ceilings there were "spaghetti" formations, with endless small stalactites hanging from the roof. 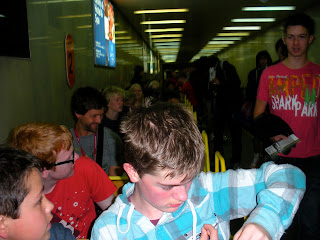 We weren't allowed to take pictures, unfortunately, but in the very last chamber, called the Concert Hall, the chamber choir were able to perform, and here they are. They call themselves Vocalicity and they are directed by my daughter. They're very good (though I say so myself!) - they've been working with the a cappella group Voces8 for two years and they sound very professional.
The woman who was conducting the tour of the caves was about to announce that Vocalicity were singing when suddenly someone in the crowd of tourists collapsed. I'm not sure what was wrong, but she seemed all right once they got her outside. Perhaps it was a panic attack, brought on by being underground for so long - and we had walked a long way through the caves before rejoining the train. 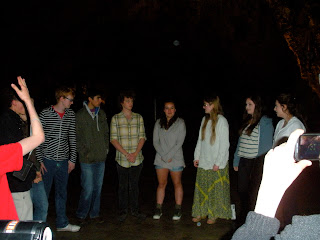 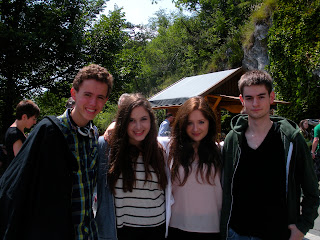 When we emerged, the sun had come out to warm us all up.
Posted by Victoria Summerley at 10:44 PM