The Diamond Jubilee: Britain gets ready to celebrate

Everywhere you look, London is bedecked with bunting. Our neighbourhood is having a street party, the shops are awash with red, white and blue and the displays range from the cute, as in these cupcakes in a local bakery, below ... 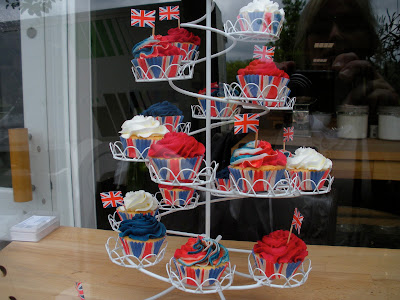 to some straightforward flag action at Victoria station, which is on my route to work ... 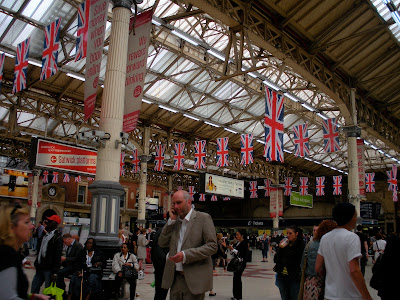 to the downright glamorous, as in this shop window display by The White Company, who sell upmarket bedlinen, clothes, and other bits and pieces. 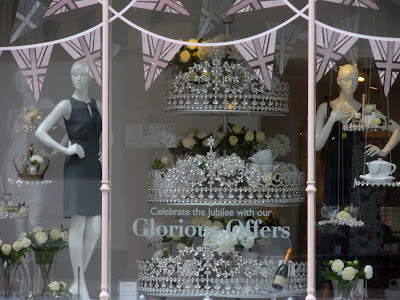 There are always the people covered in Union Jacks who camp out for a week before any royal occasion, but on the whole, the British tend not to get too visibly hysterical about things like Diamond Jubilees. Secretly, however, they seem thrilled to bits - if only because of the excuse to throw a party.
Of course, republicans think the whole thing should be abolished. I'm torn. Logic tells me to be on the side of the republicans - how can we justify the idea that someone is entitled to a position by birth, rather than earning it through hard work or popular appeal? How can we justify the principle of primogeniture, which dictates that sons take precedence over daughters?
However, the fact remains that there is huge respect for the Queen, and the job she has done for the past 60 years. On the whole, the British admire her, and it is that admiration that even the most reluctant royalists are demonstrating this weekend.
I'll be celebrating with my neighbours tomorrow afternoon, but on Sunday, just after dawn, my daughter and I will be making our way across London to rendezvous with my mother aboard her narrowboat, Galatea. (I've also written a piece about this for the i newspaper, which you can read here.)
We are taking part in the Thames Diamond Jubilee Pageant - we're number 644 of a total of 1,000 boats. These include historic tall ships and the Dunkirk Little Ships, who helped rescue our troops from the beaches of Dunkirk in 1940. If you're not familiar with the story of the Dunkirk evacuation, it is an amazing tale.
There will be music herald boats too. One is even carrying the London Philharmonic!
The Queen will be on a boat, with Prince Philip, Charles and Camilla, William and Kate and Prince Harry. She won't be on the royal barge, Gloriana - that beautiful boat is one of the 10 herald boats, and will have a crew of 18 rowers including Olympic gold medallists Sir Steve Redgrave and Matthew Pinsent. Her Majesty will be on the Spirit of Chartwell, a luxurious cruiser.
Galatea is in the first row of the narrowboats flotilla, and apparently she will be covered in shiny diamonds, with crowns on the roof, if you want to look out for us on the television coverage.
You had to audition to get into the pageant. Apparently hundreds of boats applied and only 40 narrowboats were selected, 10 of which are from the St Pancras Cruising Club, moored at St Pancras Basin, which is where my mother keeps her boat. 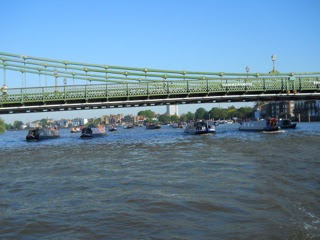 St Pancras have been helping coordinate rehearsals for the pageant, which involves the boats sailing five abreast up the Thames. Here they are practising on the river last weekend. 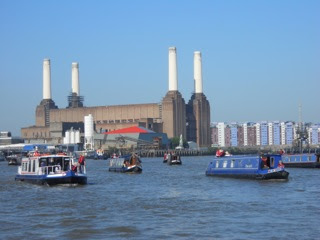 One of the good things about the river pageant is that it will look fantastic from the air, and it takes in most of the well-known London landmarks, such as Battersea Power Station, above, and the Houses of Parliament and Big Ben, below. The London Philharmonic is playing appropriate music for each landmark - so, for example, they will play the James Bond theme as they pass the MI6 building at Vauxhall, and the Dambusters theme for the RAF Memorial, a gilded eagle on a column of Portland stone on the Victoria Embankment. If you're wondering how they can get an orchestra into a boat, let alone play, have a look at this. 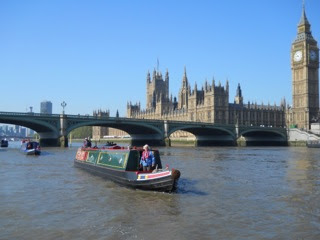 My mother is so excited, she's like a dog with two tails. I'm sure you'll be able to see her beaming from space. But kudos to her - there can't be many women in their 80s who will be taking an active part in the pageant. Oh wait, there's one on the throne.

Posted by Victoria Summerley at 12:22 AM