A paradise for plantaholics 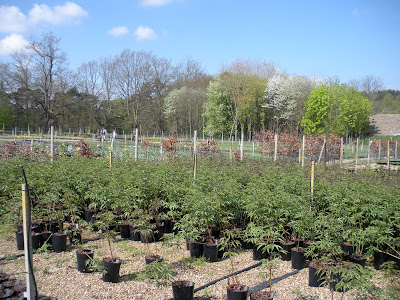 Open day at Crocus, who must by now be the UK's biggest online nursery. They have a real nursery, as well as a virtual one, just outside Windlesham in Surrey, and today they flung open their polytunnel doors to the general public.
Crocus also supplies many of the Chelsea show gardens, and were offering tours so you could see what plants were being grown. My neighbour Ruth and I had fully intended to go on one of these tours, but from the moment we arrived, we were far too interested in shopping for ourselves than to go and look at other people's choices. 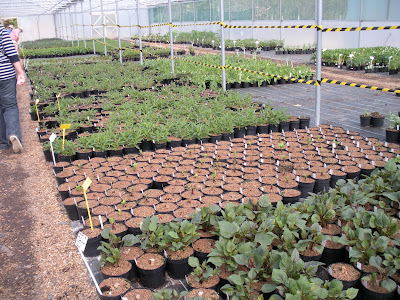 It was the first time either of us had been to a Crocus open day, and we were very impressed by the organisation. When you arrive, you are given an explanatory leaflet with a guide to the prices, and a couple of strips of stickers with your number on it.
As you go round the nursery, you pick up any plants you want, put a sticker on them and leave them in the aisle, where they are picked up by helpers. These are then loaded onto trailers and taken back to the central payment point, where your collection of plants is held under your number until you want to pay.
It sounds a bit haphazard, but it works - it means that you don't have to carry the plants round with you, and there isn't a traffic jam of garden centre trolleys everywhere. Brilliant.
If I had to make any criticism at all, it would be that it was quite difficult to find someone who knew about the plants. Most of what I assume were temporary staff brought in for the day seemed to be Polish and spoke little English. However, they were so eager to help, and so charming, that it seems churlish even to mention this.
In any case, there were loads of knowledgeable customers around. The only plant I drew a complete blank on was Asphodeline liburnica. No one seemed to have heard of it, but its feathery stems were so extraordinary, that this didn't stop anyone buying it. 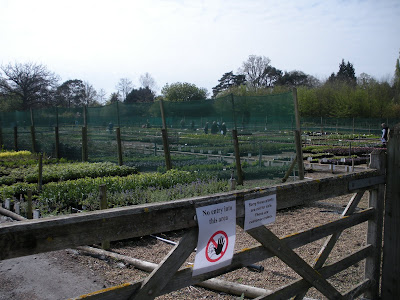 Areas that were out of bounds for various reasons - customer orders, Chelsea plants etc - were clearly marked. 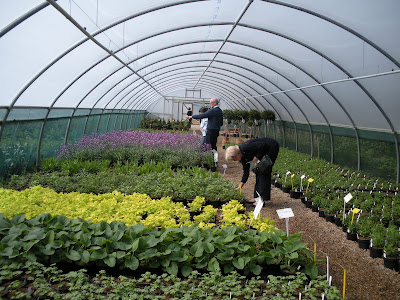 The quality of the plants was fantastic, as was the range available. The Crocus website has a "wish list" feature which, in my case, always runs to at least a dozen plants. Ruth, who is more organised than me, had actually printed out her wish list and brought it with her. How many times have you visited a nursery or garden centre only to find that they haven't got what you want? At Crocus, I got everything. 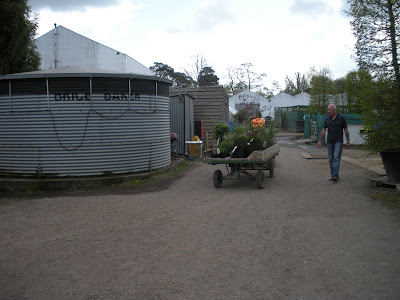 One of the tractor-trailers bears its load back to the central payment point, below. Someone then totted up your total - so you didn't have to unload and load up all the plants again - then gave you a slip of paper to take to the till. 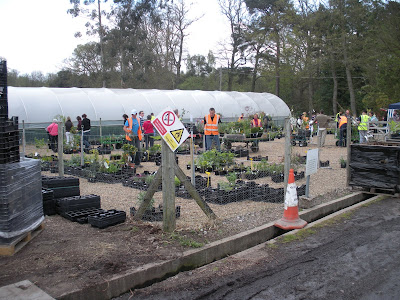 The prices, by London standards, were amazing. A typical 2-litre perennial, normally something like £7.99 or £8.99 or even more in a London garden centre, cost £5. I bought something like 15 plants for £80, which included a Trachelospermum jasminoides, on special offer at £12.50 (usual price £24.99). Ruth bought a tangerine and a lemon tree, which were on special offer at £20 each. They were fantastic plants, too - bushy and glossy and green.
Ruth and I arrived at about 11am and by the time we left, it was 2.15pm. We were exhausted but very happy - we both agreed it was one of the best day's plant shopping we'd ever had. Crocus are having three more open days, and you can get the details here. It's well worth a trip.
Posted by Victoria Summerley at 3:14 PM