Lunch at Great Dixter was cheese tart, with green salad leaves and Pink Fir Apple potatoes, those knobbly ones that look a bit like Jerusalem artichokes. The potatoes were full of flavour and the texture was just right - waxy, but not too hard. The cheese tart, I felt, was imbued with the spirit of Christopher Lloyd. Like Christo himself, it had no truck with political correctness or calorie-counting or anything soppy like that. It was very, very tasty. Pudding was gooey chocolate brownies with freshly sliced oranges.
As you'd expect with a study day on exotics, most of the students were men. There were some women there, but only two of us appeared to be as passionate about the subject as the blokes. There's something about boys and big leaves.
Everyone was very friendly, though, and conversation over the lunch table centred around winter losses (everyone seemed to have lost hardy bananas this winter) and canna virus. (Fergus had explained that Great Dixter no longer brought in any cannas from outside nurseries in an attempt to eradicate this disease.)
The afternoon activities began with a tour of the cellars and greenhouses. Fergus explained that all the cannas and dahlias were lifted and stored in the cellars, which aren't heated but whose thick walls provide adequate frost protection. The rhizomes are packed in old compost in boxes or containers (Fergus recommends those expanded polystyrene fish boxes, which give even more protection against cold). They are watered once a month, just to stop them drying out completely. 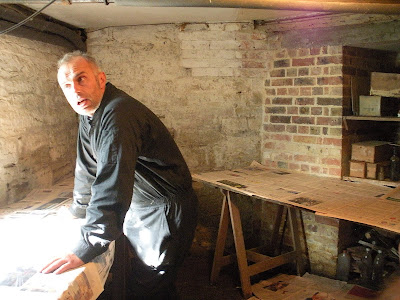 The cellars are also used to store potatoes - here are the delicious Pink Fir Apples we had for lunch. 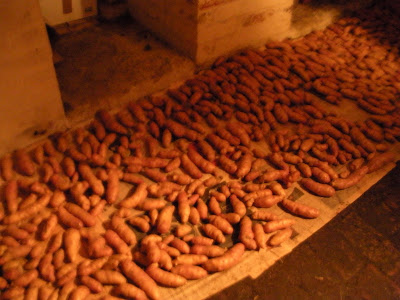 From the cellars, we went to the greenhouses, where the plants from the Exotic Garden are stored in winter. "Emergency supplies" are also kept there, to be brought out when gaps appear later in the season or when a plant is damaged. 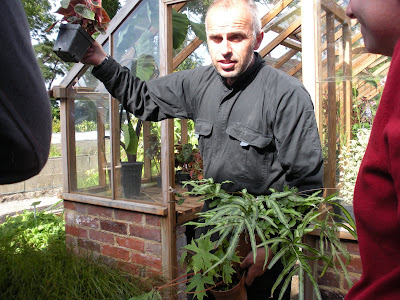 Some of the greenhouses are heated, some are not. The latest one is sunk about three feet below ground level, partly so that the earth itself provides insulation and partly because Christo didn't want to see the greenhouses from the house! (They're very nice greenhouses: I wouldn't mind looking at them.)
Fergus showed us how to propagate ferns from spores. You look at the back of a frond to see if the spores are ripe (ie when they turn dark) and then leave the frond on a piece of paper to dry out. The spores will drop, whereupon you can sprinkle them on the top of a pot filled with well-watered compost. Wrap a polythene bag around the top of the pot and leave to germinate in a warm place. He made it look dead simple, but I bet it's not...
Then we had a mini seminar on splitting dahlias. This also looked simple: the trick, said Fergus, was to pull off some of the "collar" with each piece of rhizome. He managed to transform a big dahlia in what looked like a 9inch pot into nine new plants.
Cannas could be treated even more roughly. Just look for the growing points and cut in between them, using a sharp carving knife or breadknife. (I know this is simple: I've done it. In fact, I didn't even look for the growing points, but just slashed straight down between the stems.) Remember to do this in spring, when the plants will grow away well. It's easy to see the growing points then too. 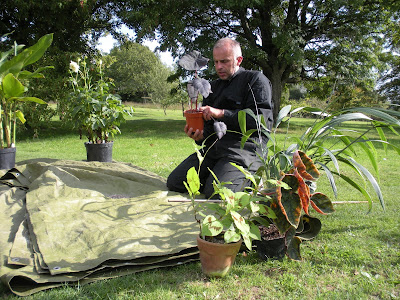 Finally, snitching an apple from a nearby tree (what a fantastic year it's been for fruit here in the UK), we arrived at the Exotic Garden. 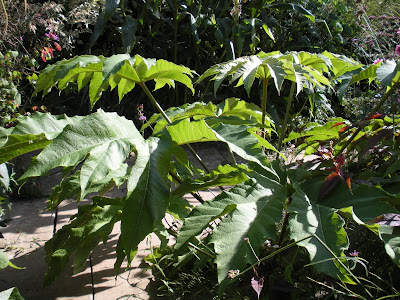 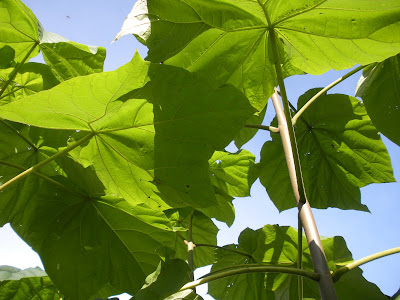 A stooled paulownia spreads its vast leaves against the sky 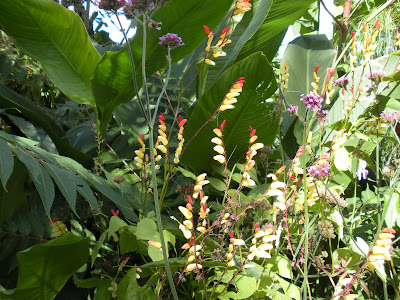 Mina lobata, or the firecracker vine, scrambles through cannas and Verbena bonariensis 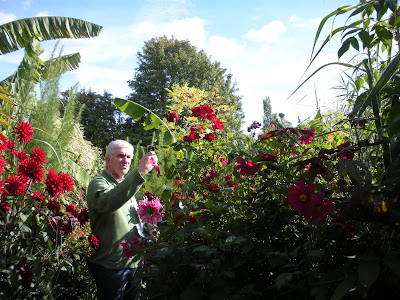 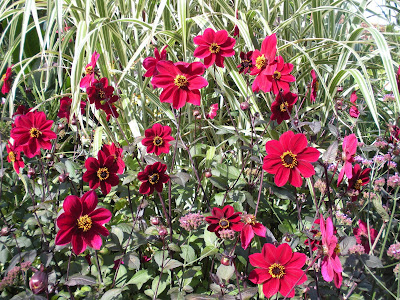 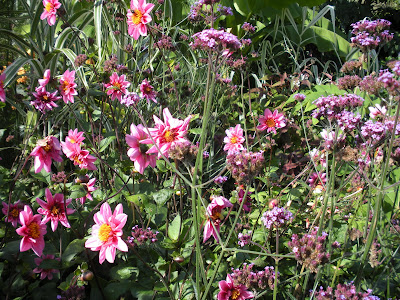 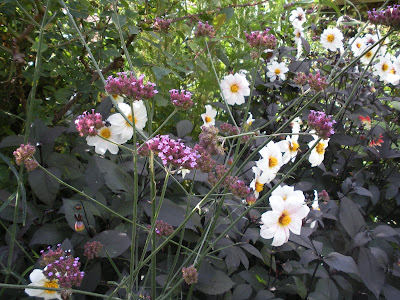 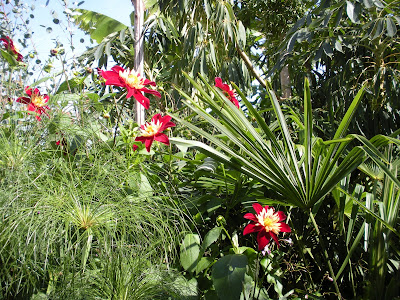 And some more dahlias. I must apologise for not noting down the varieties. But after a bit, my head began to spin ... 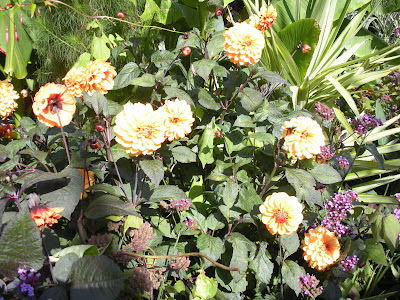 Ah, I know this one. This is (not a very good picture of) Dahlia 'David Howard'
And so, our notebooks full and our heads buzzing with information, we left Great Dixter via the nursery. But I couldn't go before one last wander round the gardens. 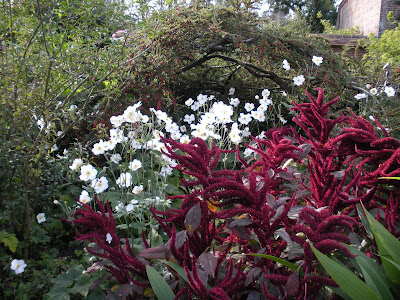 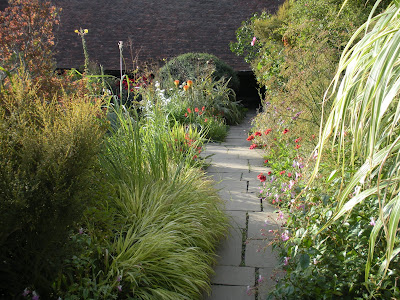 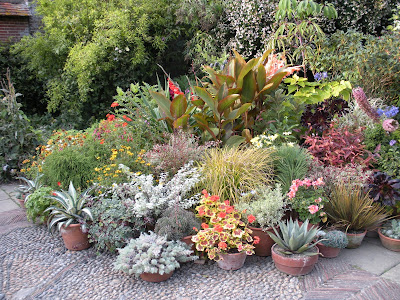 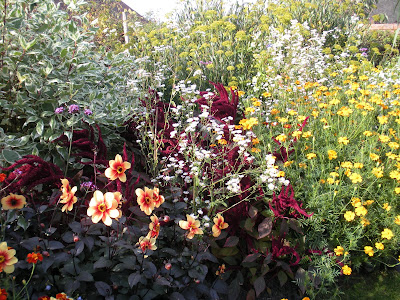 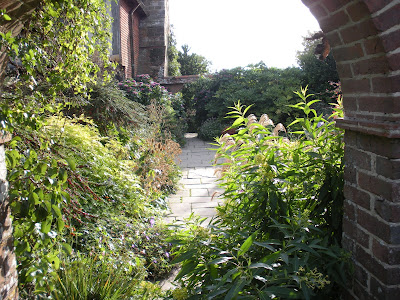 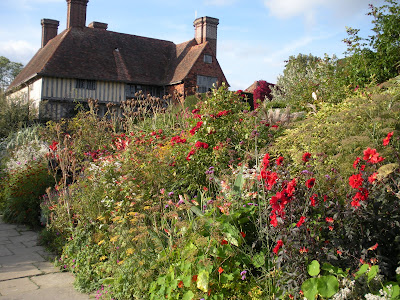 Posted by Victoria Summerley at 3:50 PM