You got to have friends...

Yes, yes, I know I haven't posted anything for a couple of weeks, but I have been busy. One job was writing what will be an occasional gardening notebook for the Independent, which you can read online here. In between all the other stuff, I've been getting on with the garden. I have:
Clipped back the miscanthus.
Cleared out the pond.
Chopped off all the bent phormium leaves.
Carefully snipped off any brown or disfigured leaves from evergreen climbers such as the hardy clematis and the jasmine.
Carried the two flowering prunus in their pots to a new position on the terrace while they are in flower.
Cut the grass.
These are all jobs I am perfectly capable of doing by myself. However, there was one job I dreaded tackling without help, and that was the paving on my terrace, which was slowly lifting thanks to bamboo roots exploring beneath it.
One paving slab - right in the middle of the terrace; right where I tripped over it every time I walked past - had risen up nearly two inches. And where the steamer chairs sit in the sun, the paving was at an angle of 45 degrees, which not only looked unsightly, but had already wrecked the mechanism on an old steamer chair, thanks to years of trying to adjust the angle of the back when the chair wasn't sitting straight in the first place.
Luckily, I was able to enlist the services of my friend Ollie who is not a keen gardener, but is very keen on "projects". He's seen the garden before - and admired it - but his eyes really lit up at the thought of a bit of problem-solving involving the use of power tools and brute force. Needless to say, I encouraged this attitude like mad.
The first slab we attacked was the one in the middle of the paving. This is what we found underneath. 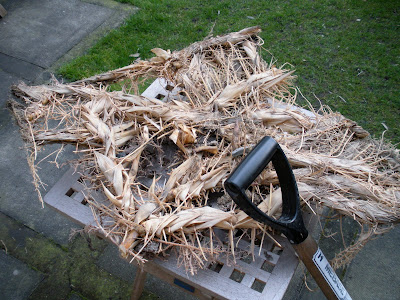 It's rather beautiful, isn't it, in a sinister sort of way? I'd always had difficulty digging out bamboo shoots which are as tough as steel cables and stick to the ground like superglue. But Ollie chopped through them in a matter of minutes while I made us a cup of tea.
By the way, the spade is a border spade from Homebase that I bought at least 20 years ago for the equivalent of £5. It just shows you don't always have to buy expensive kit. 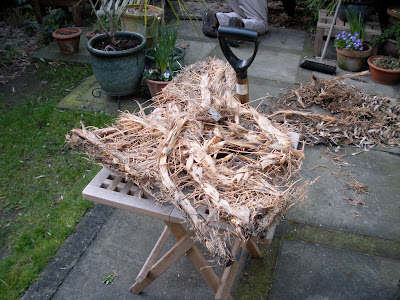 You can just see Ollie's feet in the rear of the picture. If you look to the left of his heels, you can see a slab that is yet to be de-bambooed, which gives you some idea of how bad the problem was. We had to resort to an angle-grinder to cut out some of the shoots, in order to get a nice straight line to put the slabs back again.
Ollie was worried that it might damage the rest of the bamboo and I'd wake up next morning with a dead plant outside. You know what? I don't think I'd have cared very much.
Last year - on 12 April, to be precise - I wrote a post entitled: "It's Easter, so that means it's raining." This year I could have written the same title again (in fact I nearly did). It is raining. It is cold. It is quite miserable.
I don't know why we expect nice weather at Easter - according to the Met Office, snow is more likely in the UK at Eastertide than at Christmas time. Somehow, I don't find that information very cheering.
Posted by Victoria Summerley at 8:21 PM