It was the kind of autumn day you dream about here in London today. Crisp, cold air; blue, blue sky; copper-coloured leaves crunching underfoot. Just the sort of day you want if you need to get out in the garden to do a bit of tidying up.
For me, the day began rather musically, with a rehearsal of the St John Passion by J S Bach. My daughter's school is performing it in the spring so the parents' section of the choir met this morning to get our heads (or should that be voices?) around it for the first time. Fabulous.
After that, it was a quick whizz to the King's Road to do some shopping, then home to the garden, which seemed incredibly peaceful after choir practice and the bustling Saturday crowds.
Now that the clocks have gone back, what used to be an afternoon in the garden is really only a couple of hours. But I made the most of it, fishing dead leaves out of the ponds, and sweeping up the droppings from the ash tree in next door's garden.
I'm not a huge fan of ash trees. Like all unwelcome guests, they seem incapable of taking a hint, sprouting seedlings that resist your attempts to unroot them with a tenacity that would be admirable if it wasn't so annoying.
In Norse legend, the Tree of Life, Yggdrasil, was an ash tree, and in northern Europe ash is considered to be a charm against evil. In my garden, however, I would quite like a charm against ash trees. Ash leaves remain on the stem, so they get tangled up in everything, and getting rid of them feels more like combing the garden rather than sweeping it.
But even sweeping ash leaves was a pleasant task today, as dusk fell and the flowers of the fatsia glowed in the last rays of sun. You could have heard a pin - or even an ash leaf - drop. 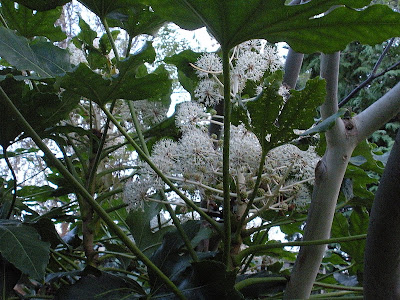 Just as I was standing back to admire my newly-tidy plot, the first one came. KA-BOOM!!!
*@$+%*&@*! (I said). Bonfire Night. Time to go inside and put in the ear-plugs.
When I was little, Guy Fawkes Night, 5 November, consisted of a few rockets and sparklers and perhaps a Catherine wheel or two. You had your fireworks and bonfire ON 5 November, or the nearest Saturday thereto.
These days, Guy Fawkes celebrations start somewhere back in October and extend until nearly Christmas. The ordnance involved is astonishing, consisting mainly of bomb-like projectiles with the ability to shake a whole street. Another favourite is a kind of whining, whistling thing. The end result is the same, though: KA-BOOM!!!!!!
The public displays are fantastic, with lots of exploding stars and sometimes fairgrounds alongside to pull in the crowds. But the private parties seem to be limited to the KA-BOOM!!! variety.
There's only one thing to do when the Normandy landings are being reenacted outside. Go inside and watch a war film. So I'm going to settle down and watch Ice Cold in Alex, which, unbelievably, I've never seen, and which came free with the Daily Telegraph this morning. What a lovely day it's been.
Posted by Victoria Summerley at 4:42 PM