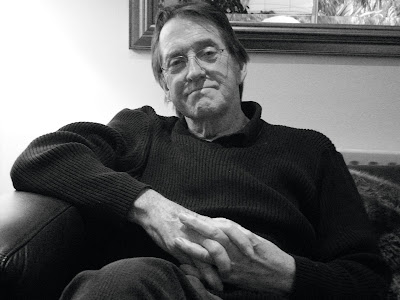 When something cataclysmic happens in your life, it seems to absorb everything. I thought long and hard about whether to write about this, but in the end it just seemed really strange, and wrong, not to say anything at all.
My husband Craig died last week. He was the love of my life. He was the sort of person everyone loved, in fact: charming, kind, patient, generous, sociable. He had a kind of glamour about him, thanks in part to the fact that he was tall and handsome, but also because he never seemed to take life too seriously. He approached life with a smile, and he approached death with huge bravery.
Craig and I had many friends, dozens of whom have written to say how much they will miss him. Affection and respect for a wonderful man is the theme that runs through these letters, as well as tributes to a newspaperman who, during his long career in cut-throat Fleet Street, managed always to retain a sense of decency and kindness towards his colleagues.
Ironically, we never saw as much of these friends as we could have done. We were always promising each other that we'd socialise more, but the truth was that we were perfectly content with each other's company. Our idea of heaven was to be together.
Craig had non-Hodgkins lymphoma. He was first diagnosed with it last year, and after a course of chemotherapy, was told that he was in complete remission. This year, it came back with even more force. It affected his bone marrow and chemotherapy - at least at a level that he could tolerate - proved ineffective.
I miss Craig so much that I can hardly bear to think about it. Instead, I try to look back at our time together - so many memories of the happiest years of my life.
Posted by Victoria Summerley at 7:46 AM

The onset of winter is so often seen as the death of the year, a rather depressing time when we withdraw to a more interior life and peruse seed catalogues in front of the fire, or feel guilty about unplanted bulbs. Some of the plants in my garden, however, actually come into flower about now, which I always find cheering and intriguing. It's a comforting reminder that life goes on, even in the darkest times. 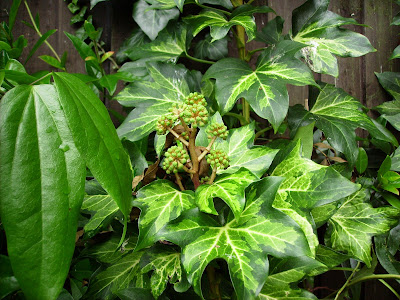 Flower clusters on x Fatshedera lizei (Fat-headed Lizzie). This one is 'Aurea Maculata' and it's a really lovely plant: tough, untemperamental and looks especially good on a north-facing fence like this, because it always appears to have sunlight on it. The clematis is Clematis armandii 'Little White Charm'. It's supposed to be less vigorous than the normal armandii. Hmm. 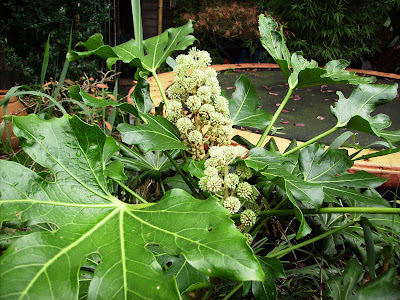 A Fatsia japonica in full bloom. This one is in a pot, but that hasn't stopped it flowering. Since I took this picture, it has become an even more spectacular froth of white, but I haven't had time to take a new photograph. 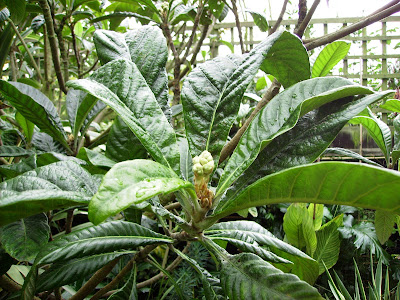 Flower buds on the loquat (Eriobotrya japonica). It's a bit late into flower this year, probably because we've had a cool summer. Normally by the beginning of November, it's in full swing, providing food for the last of the butterflies. The flowers aren't very spectacular but once they come out they scent the whole garden with a frangipani fragrance 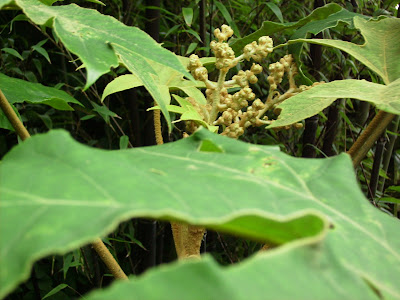 Flower buds on Tetrapanax papyrifera. As you can see, the inflorescence is very similar to those on the fatsia and fatshedera, which isn't surprising considering that tetrapanax was once classified as a form of fatsia. Apparently, the flower spikes can get up to a metre long, but I haven't managed to find any pictures of tetrapanax in flower on the internet, so I've no idea if this is true. It was quite difficult to take this picture as I wasn't really tall enough to get level with the flowers, so had to stand on tiptoe with the camera above my head.
Posted by Victoria Summerley at 9:11 AM

I'll say one more thing about the American election and then I'll shut up. (Maybe.)
Something that really makes me laugh is the way the wives stand behind the candidate, nodding and smiling. (Cindy McCain seems particularly prone to this, but I don't want to seem partisan. I'm sure Michelle Obama does it too, and every other candidate's spouse, for that matter.)
How many wives and partners do you know who stand behind their husbands nodding and smiling whenever they say something? (Outside of Afghanistan, I mean.)
In my experience - and I'm speaking personally here - they're usually shaking their heads, and butting in before Hubs is two seconds into a story, saying something like: "No, no, no, it wasn't like that at all. It was Dave who was wearing the leopardskin thong, not Pete, and Amanda had the Polaroid camera." (You can see I've been reading Kiss My Aster one too many times.)
Or the interjection might be along these lines: "No, it was Tuesday we bought the new washing machine, not Wednesday. Don't you remember, because that was the day your mum had to take her cat to the vet and a freak lightning bolt destroyed No 22."
As for smiling, the "little woman" is usually rolling her eyes in exasperation.
Come to think of it, how many wives do you know who merely stand behind their husbands? Without shoving them out of the way to get a better view?
Posted by Victoria Summerley at 11:53 AM

This has been a busy week, so apologies to all of you who took the time to comment on my last two posts and failed to get anything in the way of a response from me. (Don't think I'm not appreciative: one of the very best things about being part of Blotanical is the intelligent feedback you get from other bloggers). My husband Craig managed to escape from hospital for a week and I've been at work as well, so I haven't had much spare time.
Craig goes back to hospital on Monday for his next blast of chemo, so he'll probably be in for at least another week. I'll be busy visiting him, and going to work. Not much change there then, except for the fact that work will be even more manic than usual because of the American elections.
We get very excited about any elections at The Independent. Polls in Zambia and Israel currently have our attention as well, but we get particularly excited about American ones. (During British general elections, of course, we go way beyond excitement into full-blown obsession.) And of all the US elections I can remember, this has been the most exciting.
Here we have a young black man, who stands for new beginnings, facing an old white man whose selling point seems to be experience and a steady hand. Change versus the status quo. That's what most elections boil down to in the end, when you think about it, but along the way, there have been some exceptionally entertaining moments, thanks to Barack Obama's epic battle with Hillary Clinton, and then the controversy over John McCain's choice of VP.
I'll be staying up to watch the coverage on Tuesday night and working flat out the rest of the time. Does any of this have anything to do with gardening? Yes, it's going to be another week when I won't get my bulbs in. Or spike the lawn. Or get the turf dressing on. Oh, well...
Posted by Victoria Summerley at 9:39 PM